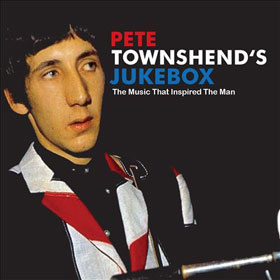 UK-based Chrome Dreams has released a number of these Jukebox titles over the last few years, including titles exploring the influences upon Keith Richards, Bob Dylan, Paul McCartney and even The Grateful Dead. And while some of these artists have endeavored to do something similar themselves (McCartney’s 1999 Run Devil Run comes to mind), the concept is a sturdy and often illuminating one.

At its simplest, Pete Townshend’s Jukebox is a 28-song single CD survey of the songs that informed the musical sensibility of The Who‘s primary composer and lyricist. Townshend himself – a rather chatty interview subject in his day – made explicit mention of many of the artists and songs now brought together on this set. And in fact The Who covered several of these tunes: Sonny Boy Williamson‘s “Eyesight to the Blind” was the sole cover on Tommy (1969). And even back in the earlier 60s when The Who played Murray the K‘s NYC showcases, Townshend championed Mose Allison as an influence (his “Blues” is included here).

Some of the selections are pretty obvious, having influenced most all of Townshend’s contemporaries in one way or another. But listening to Link Wray‘s “Rumble” in this context, it’s clear that Townshend spent many hours letting the distorted jangle of Wray’s guitar seep into his psyche. And The Who always made their soul roots explicit, so having a James Brown tune (“I Don’t Mind”) here is little surprise.

The bluesmen included here would enjoy a belated and mightily-deserved renaissance/re-evaluation in Townshend’s 1960s Britain: Howlin’ Wolf (“Spoonful”) and John Lee Hooker (“Dimples”) are thus represented here as well. But while the jazz influences upon Townshend might be less obvious, works from Cannonball Adderley, Ella Fitzgerald and Charlie Parker fit smoothly into this collection.

Such a collection wouldn’t be complete – or even taken seriously – if it didn’t included some of Townshend’s rock’n’roll heroes; this set does, spotlighting Johnny Kidd & the Pirates (Shakin’ All Over” and “I Can Tell”) and Eddie Cochran (“Summertime Blues,” of course). But despite the inclusion of Otis Blackwell‘s “Daddy Rolling Stone” and Bo Diddley‘s “Road Runner,” Pete Townshend’s Jukebox isn’t merely a here’s-the-originals-of Who-covers set. The featuring of Ray Charles (the kinetic jump blues of “Mess Around”) and Booker T & the MGs helps remind listeners what was finding its way into Townshend’s ears while he was writing “Anyhow, Anyway, Anywhere” and “My Generation,” for example.

If there’s one shortcoming of this set, it’s the lack of any country-and-western tracks; Townshend cited Jim Reeves as an influence, and Chet Atkins-styled licks abound on early Who albums.

Derek Barker’s liner note essay draws upon quotes from the man himself to illustrate the connection each song has to Pete Townshend. And its context taken away, one can merely enjoy this CD as an eclectic collection of various (mostly but not exclusively American) music from the 1950s and 60s.