Album Review: RPWL — A Show Beyond Man and Time 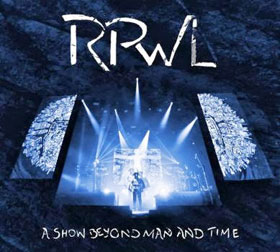 The last time anything truly new was released underneath the Pink Floyd banner (not counting expanded reissues of 70s albums) it was way back in 1994. That was almost twenty years ago. So if a newer band puts out music that strongly echoes (heh) the Floyd, the argument can be made: hey, nobody else was using the sound.

In fact, RPWL got their start as a Pink Floyd tribute band, not unlike The Machine. This German outfit (originally a foursome: the band’s name represents the first letter of the founders’ surnames) got its start in 1997, and evolved into making their own music on their debut God Has Failed only three years later. And while their music has undeniable shades of the Floyd (most specifically the Roger Waters-less David Gilmour-led aggregation of 1987-94), RPWL has more to offer than merely delivering Floyd readymades or retreads.

Their 2012 studio album Beyond Man and Time represented a slight realignment of their sound, though the influences and approach remained fundamentally unchanged. And now in 2013, a live document of the supporting tour has been released: A Show Beyond Man and Time, in both DVD and 2CD configurations.

Right out of the gate, the narration of “Transformed” has more to do sonically, stylistically and thematically with Ray Thomas or Graeme Edge of The Moody Blues, or perhaps with Alan Parsons Project. And then as “We Are What We Are” unfolds, listeners will find bits of influence that brings Porcupine Tree (especially their earlier work circa The Sky Moves Sideways) to mind. Certainly, Kalle Warner‘s sinewy, soaring guitar lines owe a lot to the Gilmour school of lead guitar playing, but when the brief metallic thunder of the song’s midsection kicks in, it’s clear that RPWL are not stuck in the 90s.

Yogi Lang‘s smooth vocals have that plaintive, heartfelt quality that Gilmour is known for (and that Waters has always lacked), and his vocal texture and enunciation belie that fact that he and his bandmates are from Bavaria.

The instrumental passages in”Unchain the Earth (The Scientist)” are strongly reminiscent of “What Happens Now?” from Porcupine Tree’s 2007 EP Nil Recurring. And “Somewhere in Between (The Dream of Saying Yes)” feels like (and subtly quotes musically) from “Summer Elegy” on Richard Wright‘s 1978 solo LP Wet Dream. Yet because RPWL’s pop sensibility is the equal of Steven Wilson‘s, the songs don’t feel at all like ripoffs or pastiche.

Having two keyboard players (Lang plus Markus Jehle) helps a lot in developing the song textures in a live setting. And while some reviews of RPWL’s overall sound suggest that more backing/harmony vocals would improve them, on this live set there are indeed some vocals beyond Lang’s, courtesy Jehle and bassist Werner Taus). The five-piece approach the songs as an ensemble: while the playing is ace, none of the songs – unusual for a live set – turn into showcases of individual instrumental prowess.

And for this concert – shot in February 2013 in Katowice, Poland – the band are joined for an encore by Ray Wilson. The ex-late-period-Genesis vocalist lent his guest vocal (making him, one supposes, RPWL’s Roy Harper) to their 2004 hit (in Europe) single, “Roses” on their 2004 album World Through My Eyes, and he shows up here in Poland to sing it live.

Customarily, live albums are not the ideal entry point for newcomers interested in a band’s catalog. But thanks to its sonic clarity and spirited delivery, A Show Beyond Man and Time works quite well as an introduction to RPWL. Though the live set and studio album upon which it’s based is a concept-piece, it’s not necessary to follow along with any sort of story line to enjoy the music. If you liked Floyd and you dig the sort of progressive/classic rock nexus exhibited in such modern acts as Blackfield, then you’re all but certain to enjoy a couple of hours spent with this flawlessly-recorded live document.