Most Americans know the name Woody Guthrie. What they know of him beyond that – and/or their opinion on what he means to popular culture and music – varies widely. He’s an often misunderstood character, and as so often happens, human tendency toward a sort of reductionist thought tends to try and simplify him, to distill his essence down to a short wiki entry.

His body of work is an inconvenient presence to that sort of approach. The man wrote at least 3001 songs (that’s how many that have been officially catalogued by his official foundation) and there were certainly more. He recorded extensively, as well. And a new compilation brings together a thematically linked set of recordings dating mostly from the 1940s and 50s. Woody Guthrie: American Radical Patriot collects for the first time in one place all of the Library of Congress recordings Guthrie did with historian Alan Lomax, his Bonneville Power Administration songs; demos he did in hopes of supporting public health initiatives to combat venereal disease; and songs to support the WWII war effort. Six CD document that material, and a detailed annotation guides the listener along. 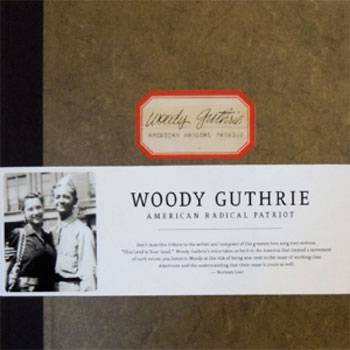 The sessions with Lomax are a rich combination of stories, songs and story-songs. In a small studio, the two men sit (with occasional sips of liquor), and Lomax – employing the polite fiction that the two had only just met – asks Guthrie to reminisce about his life as a youth in dust bowl Oklahoma, his move to California, and myriad other topics. For his part, Guthrie recounts jokes, tells heart-rending stories of death, and regales Lomax with vivid slice-of-life tales.

And quite often – sometimes without prompting, sometimes with encouragement from Lomax — Gurthrie sings and plays songs. His own tunes occasionally, but as often as not, songs he learned from others. Traditional songs adapted to his style, these tunes include “Greenback Dollar” and “The Midnight Special” (the latter written and popularized by Guthrie’s friend and another of Lomax’s session subjects, Huddie Ledbetter aka Lead Belly).

Guthrie sings of love, of his god (“Jesus Christ,”) of American folk heroes and antiheroes (“Billy the Kid.” “Pretty Boy Floyd”), and of the struggles between the haves and have nots (“The Jolly Banker”).

The last of these leads toward a discussion of a question given deep coverage in the pages of American Radical Patriot‘s stunning book: was Woody Guthrie a Communist? Evidence is presented, and in the end the reader/listener is encouraged to make his/her own decision, but the liner essay author (Bill Nowlin, though one has to look hard to find the modest author’s name or credit) clearly believes – and argues convincingly – that Guthrie was in fact a “commonist” rather than a member of any sort of organized school of thought. Guthrie’s own half-jesting words on the subject: “I ain’t a communist necessarily, but I have been in the red all my life.” Nowlin suggests Guthrie was a sort of quasi-Christian socialist, and the songs in general support that view. More than anything else, he was a champion of the common man, of the downtrodden, the voiceless.

Though amazingly plain-spoken and a voice who articulated the persona of the American common man, Guthrie was indeed complicated. His views often changed. Early on he used the N-word, until taken to task by a radio listener. (He immediately stopped using the offensive term.) His views on the glories of American frontier expansionism led him to paint a negative portrait of Native Americans in one of the songs he cut for the BPA (“Roll On Columbia,”) though Nowlin suggests — again, convincingly so — that had Guthrie been called out on this, he likely would have rethought and rewritten the lytic.

Too, he was decidedly anti-war until the sinking of the USS Reuben James by the Germans in 1941. Guthrie went on to serve in the quasi-governmental Merchant Marines, and later the US Army. He recorded many anti-fascist songs including “Reuben James” and “Whoopy Ti-yi, Get Along, Mr. Hitler.” American Radical Patriot collects those tunes as well. While at first glance Guthrie’s populist sentiments might seem at odds with the idea of recording in the employ of the Federal government, closer inspection shows that it’s not at all inconsistent. Guthrie saw the federal government as a counterweight to some of the more anti-populist tendencies of state governance; in many ways he’s the polar opposite of the misguided, mean-spirited and short-sighted 21st century so-called “tea party” mentality.

The new set also includes innumerable goodies, but here’s a rundown of the most significant among these. First, there’s a DVD including a 99-minute documentary film Roll On Columbia; eleven of Guthrie’s songs are included. The liner notes – in a chapter entitled “The Bonneville Power Administration Recordings” — tell the story of one man’s heroic stewardship of films (including Guthrie’s music) that were ordered destroyed during the dark days of McCarthyism.

Though it’s of practical use to very few people, the set also includes a 10” 78rpm disc. The record includes an alternate recording of “The Biggest Thing that Man Has Ever Done” (originally cut for the BPA) and a flip-side recording of Bob Dylan covering Guthrie’s “VD Blues.”

The physical package itself is beyond amazing. Housed in a hardcover package designed to look and feel like an old-time “record album,” American Radical Patriot may well be the – from a visual/tactile aesthetic point of view – one of the most impressive box sets ever put together. The 60pp book (not a booklet!) bound inside is essential reading, though readers are advised against attempting to do so while listening ot the CDs. And if all that three-dimensional stuff isn’t enough, an e-book (also available on Disc One as a PDF, and in hard copy form for a nominal additional charge of about $13.50) presents a much longer and more in-depth version of the book included in the physical set.

As a cultural icon, Woody Guthrie, his oral histories and his music are all exemplars of the best qualities of the American experience. That a package such as American Radical Patriot is created to honor him is one of those why-didn’t-they-think-of-this-before things. But here it is. Simply essential.