Bill Kopp: You’ve used keyboards before, of course, but the new album (and the last couple) features Mike Keneally, as opposed to on some of the earlier albums where you sometimes overdubbed keys yourself. Does having Mike on board allow you to expand what the keyboard is able to do in your music?

Joe Satriani: Oh, absolutely. I still play keyboards on the album, but it’s easy to pick my stuff out: mine is the slow-moving keyboard kind of stuff – the odd noises and things like that – and Mike is a full-on keyboard player. He’s a virtuoso musician.

BK: I remember him from his days with Frank Zappa.

JS: Right. So if you take a song like “Lies and Truths” form the new record, there are some weird sustaining synthesizer notes going on throughout; that’s my performance, from my home studio. But all of the really cool moving keyboards – organs and harmonic synthesizer stuff going through the choruses – that’s all Mike, ’cause I can’t play that kind of stuff.

And Mike can improvise: he can give you unbelievable performances one after the other. You’re always spoiled. 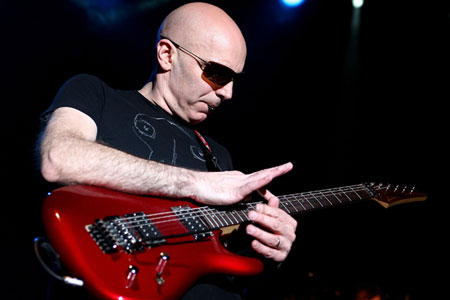 BK: Following on that point, to what extent do you map out what you want Mike – and the other players, for that matter – to play on the records, and to what degree do you leave it up to them?

JS: Some of the songs come with quite a lot of recorded information that I prepare in my home studio. And we record along with the prerecorded tracks. I’ll play the melody and solo live, and we’ll be listening to my rhythm guitar tracks from the home studio. It might be that there’s already an organ part, and I want Mike to play grand piano live, or there might be a song where there’s almost nothing. In that case we’re playing as a live band in the studio. So it really depends song to song.

I’ll play the music for them in the morning; we’ll listen to it two or three times. Then they’ll make their own charts, and go out and fiddle with their gear to find the instruments and amplifiers that they thing are going to work best. And then we start recording impressions; I guess that’s what you’d have to call it. And I give them the freedom to do something to the song that they think would make it better. They listen to each other, and bounce off what they’re hearing. And then after about seven or eight takes, generally we’ve got something that’s worth hearing. It’s that easy.

BK: If pressed to put into words how Unstoppable Momentum differs from your previous work, how would you respond?

JS: Well, it might be…it’s hard for me to say. Because that’s a critic’s view, and I don’t have that perspective. I’m too close to it.

But I can tell what I went into it trying to do. I tried to make it my most melodic record, and I wanted to break free even more from the constraints of the instrumental guitarist. So I felt like, “If I want to do a song like ‘I’ll Put a Stone on Your Cairn,’ or I want to do ‘Three sheets to the Wind,’ or I want to have songs like ‘Jumpin’ Out’ and ‘A Celebration’ on the same record, I’m just gonna do it.” I’m just gonna let it happen; I’m not going to let any exterior force make me think that I have to make all the songs sound the same…the same guitar sound, or playing a certain way.

So in that way, if I try to distill the answer into the smallest sound bite, I’d say it was really a melody-driven record. I tried to create some new contexts for myself as an instrumental guitarist.

BK: I interviewed you in 2006 when Super Colossal came out. At that point you mentioned that for your G3 series, you had hoped someday to get Jeff Beck to participate. Do you still hold out that hope?

BK: Last question, completely out of left field. But I’ve always wondered about this. You’re credited as a backing vocalist on the first (1986) Crowded House album. How did that happen?

JS: I was in a band called The Squares. It was a three-piece out of the San Francisco Bay area. A guy named Andy Milton was our bass player and vocalist, and I was sort of the second lead vocalist and guitarist. We were almost produced by an up-and-coming producer named Mitchell Froom.

So Mitch ended up producing Crowded House, and he was in L.A., working on that record and trying to figure out who to get to be background singers for this band. And he didn’t want the usual L.A. guys. He remembered the vocal blend that Andy and I had, and he gave us a call. We flew down for about three days, and we sang background vocals on about six songs.

I think it’s the only time I’ve ever been paid to sing! That was the beginning and the end of my career as a singer.

It’s a wonderful album; you can really hear Andy’s voice; he had a beautiful voice. I just kinda blended with the drummer [Paul Hester], and Andy would sing along with the lead vocal [Neil Finn].

BK: Thanks for answering that, because I know it’s about as far off-topic as we could possibly go.