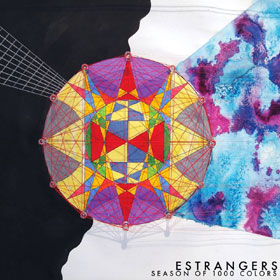 If there was a common musical thread connecting most of the several dozen acts at Hopscotch 2013, it was edginess: an approach to songwriting and performance that leaned in an outsider direction. From Pere Ubu (sort of the grand-old-men of the genre) to The Breeders (90s sensations reunited) to John Cale (avant garde giant goes semi-mainstream but not really) to lesser-known acts, the focus was alternately on being spooky, dreamy, impressionistic or otherwise not-poppy.

Winston-Salem based band Estrangers apparently never got that memo. Their songs are highly melodic, their presentation straightforward. And while there’s a gauzy layer of reverb and feedback in many of their songs, one need not dig deep at all to unearth catchy melodies full of hooks. Their live presentation – on the tiny stage of Raleigh’s Berkeley Cafe – closely mirrors the sound and atmosphere they’ve captured on their full-length debut Season of 1000 Colors. That self-released long player – available on CD, download, stunning colored vinyl and Spotify – captures the shade and light that is guitarist Philip Pledger‘s songwriting style. For such a relatively young band – Pledger attempted some “way back when I was in college” jokes onstage, and they mostly fell flat – theirs is a intriguingly developed sound.

The album opens with the uncharacteristic instrumental”El Paradiso,” sounding for all the world like Neil Young at his most tuneful, or perhaps The Band. That track – with its spaghetti western feel — is unmasked as a red herring once “Cape Fear” kicks in: the group’s almost cinematic approach is revealed, with a sound likely informed by Pet Sounds and SMiLE era Beach Boys. But while Estrangers draw upon solid and well-established blue chip influences, they don’t feel backward-looking. Think of them as perhaps an exponentially more tuneful Fleet Foxes.

But even that comparison is unfair: there’s noting precious or mannered about Estrangers. Their songs seem to be a 21st century expression of classic pop themes and songcraft. And they’re not afraid to use keyboard as a central textural element; David-Todd Murray‘s shimmering runs on piano and organ (with some synthesizer sounds here and there) enliven already infection tunes like “Scatterheart.” It’s refreshing to find a group that can employ familiar chord progressions in a fresh way. And not simple ones; Estrangers’s songs are built on a tuneful foundation not unlike Elton John‘s best 1970s work.

The boppy jangle of “Dayzd” feels like early 70s AM radio pop, but it doesn’t sound like it. And the combo organ sounds on the track harken back even farther, to sixties garage (Estrangers don’t sound like garage, either; not at all).

The band takes a hard left turn for the tantalizingly brief “Moonraker,” a surf’n’spy instrumental in the fine tradition of Los Straitjackets. It’s built upon a primordial riff, and it ends too soon. Luckily what follows is the more modern-sounding “Monarchs.” Pledger’s vocal style doesn’t have the widest palette, but it’s very effective at delivering his songs, and in giving the group an even more identifiable sound. Murray’s keyboards add loads of texture here. Insistent and solid drumming from Drew Braden propels things along; Nathan H. Bedsole‘s bass parts are occasionally deep in the mix, but they’re doing what they’re supposed to do even if we can’t always perceive them doing it. 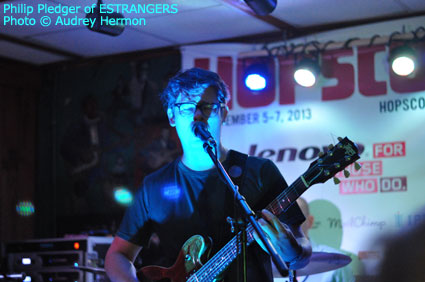 The romantic “Hold Me Close (L’inverno)” is Season of 1000 Colors‘ sole concession to Brill Building pop; that influence is generally kept just under the surface; here – within this spare, echoey vocal-and-guitar arrangement – it’s on full display.

At under two minutes and with only two chords, “Blackberry Drift Mantra” is one of the album’s shortest tracks; unlike “Moonraker,” it doesn’t really go anyplace musically; it’s barely a song. But it provides some nice textures. The album’s most upbeat tune follows: “Love’s Pure Light” would be a prime contender for a single, if we lived in a time where such a creature still existed. Murray’s insistent piano is the tune’s centerpiece, though on the choruses, the feel changes completely. The end result is a sort of happy rethink of the Echo & the Bunnymen sound.

“Mrs. Bee” is the sole track on which Pledger shares songwriting credit (with Murray, as it happens). There’s a slightly different feel to the song’s structure, and it’s reflected in the arrangement: fewer murky effects upon Pledger’s vocal, and a slight countrified twang in Mike Wallace‘s guitar. Here Estrangers sound a bit like Atlanta’s criminally ignored Warm in the Wake.

Just when you think Estrangers have used up all the melody they have on hand, they serve up “Sunmelt,” another tasty morsel from what seems to be a very deep well of pop songwriting from Pledger. The combo organ provides a lovely backing for Wallace’s supremely catchy guitar solo. Season of 1000 Colors wraps up as it started, with a Spanish-titled instrumental: “Las Puertas” (“The Gates”). The languid tune restates some of the musical themes found elsewhere on the album, and fades into what feels like a fair amount of backwards-tape manipulation, all delivered within a low-volume sonic haze as the band floats away. Let’s hope they return soon with a followup of comparable quality.