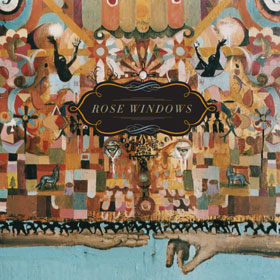 Maybe it’s something to do with the soggy Pacific Northwest climate, but there have been a number of bands coming out of the region who play a sort of tribal-psych music. These artists – though each possessing their own unique, identifiable style – are influenced and informed to some degree by at least three factors: the communal, egalitarian hippie aesthetic of the late 60s and early 70s, the super-heavy (some might say plodding) approach of Black Sabbath, and the refined, classically-oriented style of The Moody Blues. Black Mountain from Vancouver BC is at the forefront of this style, but a newer group is showing that they have a unique take on the subgenre.

Like the label (Sub Pop) that released their 2013 debut The Sun Dogs, Rose Windows are from Seattle WA. The seven-member group came together in 2010 when founder Chris Cheveyo (guitar and vocals) decided he wanted to move beyond the confines of heavy rock. The band incorporates eastern influences and a gentle touch into a still-pretty-damn-heavy sound. I asked drummer Pat Schowe how that manifests itself in his playing. He says that although he’s been listening lately to a lot of afrobeat such as Fela Kuti, “For my playing, it’s more of a traditional Western rock’n’roll.” So the result is, he says, “a sort of East meets West sort of thing. Chris does a lot of Persian-style scales.” And that blends with the rock rhythm section to “make it special,” he says. That combination introduces the Eastern sounds while not sounding too alien to Western ears unaccustomed to such things. “When some Westerners listen to Eastern music, they get scared,” Schowe laughs. And he laughs again when agreeing that Rose Windows’ music is a sort of gateway drug.

Producer Randall Dunn‘s pedigree includes a good deal of extremely heavy artists including SunnO))). That contrasts with Rose Windows’ balance of heavy and fragile. One can hear nearly as much McDonald and Giles in the sounds on The Sun Dogs as the more obvious influences of early 70s rock. Schowe believes that the album would have been much “lighter” without the pleasantly heavy hand of Dunn working the boards. “He’s a producer more than an engineer,” Schowe points out, crediting the producer with a significant degree of creative collaboration that brought out the best the band had to offer. When he would suggest something they hadn’t thought of, Schowe says that the band’s approach was, “Forget it; let’s try it!” He laughs and adds, “He’s the best, but I don’t want to gush about him too much.”

There’s a degree of subtlety in the band’s sound that makes it especially interesting, and that makes the songs worth listening to over and over again, as they reveal new things. That’s true both of the studio versions on The Sun Dogs as well as the band’s live performance, as witnessed last weekend at the Hopscotch Festival in Raleigh NC. “That’s the whole idea, Schowe insists. “There are seven people in the band. And to have that many people in a band, you can really layer all these wonderful textures.”

The Hopscotch date is part of the band’s first trip to the eastern part of the USA. Commenting on the difference between these audiences and the ones back west, Schowe confides that “it’s way better” here. “Our first tour was to Texas; it was a fucking disaster. But when we played in New York, it was packed. And,” he gasps, “I saw people mouthing the words to some of our songs!” And he describes a New Haven CT audience as “so quiet, listening to everything.”

“We normally don’t have much banter between our songs,” Schowe says. “We’re more concerned with creating a ‘feel’ and an experience, giving more of a flow” to the performance. That said, the intimate confines of Raleigh’s Berkeley Cafe meant that the Rose Windows show was something of a communal experience: the stage was far too small to hold a drummer, a keyboard player, two guitarists, a bassist, a flautist and a lead singer, so nearly half of the band stood in front of the stage, toe to to with those of us up front. So the packed house witnessed up close what Schowe describes as “going from song to song, seamlessly.”

The band has tentative plans to re-enter the studio in January 2014, but things are up in the air: “We’re in this really in-between stage right now,” Schowe admits. “If somebody offers us something great, and says ‘We want to take you guys out [on tour], we’re going to totally jump on that. But I’m itching to keep writing. Me and Chris and David [Davila, keyboards], and a few of the others, we’re all really anxious to get back to basics and practice [new material] a little bit, too.”