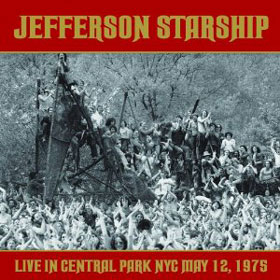 In the annals of rock history, Jefferson Starship are often dismissed. And truth be told, there’s an argument to be made there: the band (or one of its myriad lineups) is indeed responsible for the recording and release of what has come to be known as one of the worst songs ever: 1985’s “We Built This City.” Now, it’s true that no members of the band had a hand in writing this chunk of cheese – that dishonor goes to Elton John collaborator Bernie Taupin, former Frank Zappa sideman Peter Wolf (not the former J. Geils singer) and two others (yes, it took four people to write that song), but there are no confirmed reports of a gun being held to the collective heads of Grace Slick, Mickey Thomas and their then-bandmates, fording them to commit that tune to tape.

But let’s be fair. One, that tune was actually credited to a group called Starship, and Paul Kantner (whose legal maneuvers resulted successfully prevented that lineup from calling itself Jefferson Starship) was nowhere to be found during its making.

Still, hardcore fans of the band out of which the real Jefferson Starship grew – Jefferson Airplane – often scoffed at the chart-oriented material this 70s band put out. But it’s not at all fair to compare the Airplane and the (Jefferson) Starship. The latter always bore the fingerprints of the guiding hand of Kantner, and that was very often a good thing. His sci-fi themed songwriting and his husky voice fit in well with the other combined influences of the band’s classic lineup. That band released a string of very good-to-excellent singles on some albums that are better than you might remember.

And in the earliest days of the band, they were a massive concert draw, featuring no less than three lead singers, all veterans of Jefferson Airplane: Slick, Marty Balin, and (occasionally) Kantner himself. Setting aside the sorta-solo and -collaborative albums made before the group’s official launch (Sunfighter, Baron von Tollbooth and the Chrome Nun, and even 1970’s proto-Jefferson-Starship Blows Against the Empire), when the Jefferson Starship really got off the ground (sorry!), they released some fine albums.

That string began with 1974’s Dragon Fly, containing the singles “Ride the Tiger” (a hit) and the Balin guest spot “Caroline” (an album favorite, included on the group’s 1979 best-of, Gold). A mere nine months after Dragon Fly, Jefferson Starship released Red Octopus, the best and best-selling record they’d ever have. That album found Balin returning (for a time) as a full member, and it spawned two hit singles (“Miracles” and “Play On Love,”) plus another popular album cut, “Fast Buck Freddie.”

In between the release of these two albums, the band played a free show in Central Park before a massive crowd (estimates vary widely, but nobody questions that turnout was huge). And even though Red Octopus wasn’t yet in stores on this May 12, 1975 date, the band played two of its three soon-to-be-popular numbers, along with the most popular numbers from the previous record. To that they added some material from other sources: some songs from Balin’s previous (and little-heard) band Bodacious DF (“The Witcher” and “Drivin’ Me Crazy”) and a spotlight number featuring fiddler Papa John Creach. And for the faithful, the tail-end of the show included three classic Airplane numbers, “White Rabbit,” “Somebody to Love” and “Volunteers.”

That set, spread across two discs, has now been released by Real Gone Music. The original show was broadcast on FM radio, so high fidelity tapes (courtesy of the band’s management, Gordon Anderson tells us in a brief Producer’s Note) were used for all but a few seconds of the release. And the band’s in fine form: the aggregation might not have adhered to the same style as Jefferson Airplane, but then by the mid 70s, the original members had all moved in their own individual musical direction. Even had Jack Casady (bass) and Jorma Kaukonen (guitar) somehow been persuade to travel on the Starship (sorry again!) , the result would likely still not have sounded like the Airplane; that duo’s Hot Tuna work variously explored country blues and power-trio rock styles far removed form Jefferson Airplane’s radio-ready “album rock.”

While Jefferson Airplane had released live documents of their performances (1969’s Bless Its Pointed Little Head and Thirty Seconds Over Winterland, Jefferson Starship did not; this release is the first official live recording of the band from the 1970s, and it captures them at their peak. Recommended.