Rudi Protrudi: We did a single in 1972 and our singer was very into Jethro Tull , and we did “Locomotive Breath” along with a lot of other stuff. He played flute, and he had the Ian Anderson thing down.

Yeah, I like the song. And so when we started writing our own stuff, I just remembered that riff. I thought, “If that was a little punkier, and if we changed the minor chord to a major, that could be a pretty rockin’, garage-sounding chord sequence.” So yeah, I stole it. But I changed it.

It’s funny that you mention it, too. Because this tribute album we have coming out ( In Fuzz We Trust ) is a celebrity compilation. Eighteen tracks, fifteen bands from the sixties that influenced The Fuzztones . I actually tried to contact Ian Anderson to see if he’d cover “Bad News Travels Fast.”

Bill Kopp: That would have been great…

RP: Wouldn’t it? With a flute solo in the middle…

But I couldn’t reach him. So we had to stay with sixties guys. ‘Cause I was gonna throw a couple seventies guys in. Black Oak Arkansas was another one that influenced me. See, that’s the other thing: a lot of 80s and 90s garage revivalists – and now – if they’re gonna take something from somebody, they’re gonna take form such obvious sources. If you’re a garage fan – or worse, a purist [laughs], or a record collector – you’re gonna recognize that riff immediately. You’ll say, “Hey, they stole this from here and there.” So if I was ever gonna be influenced by anybody that it was obvious it would never be form a 60s garage band, I’d take a riff from somewhere where they’d never look!

RP: Yeah, something like that. And then I’d make it sound “garage.” Again, I think there’s a skill to that as well. I mean, how many people can make Jethro Tull sound like the Fuzztones? 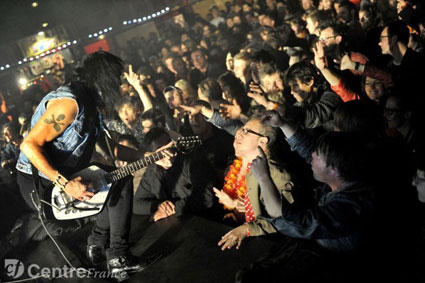 In our career The Fuzztones have covered Bobby Darin , Black Oak Arkanasas, Bo Diddley …and in my country career I’ve covered Pat Boone …in another project I covered Tchaikovsky and the David Rose Orchestra . I never stick to garage. Because in all honesty, anything that we play is gonna sound like us. If you listen to the greats – Chuck Berry , Jerry Lee Lewis , Bo Diddley – they would cover some pretty strange things sometimes. And they’d make it sound like them . Jerry Lee did “Somewhere Over the Rainbow,” Chuck Berry did some calypso stuff by Harry Belafonte . Bo did “Sixteen Tons” by Tennessee Ernie Ford .

If you’re willing to experiment and go out on a limb, you’ll get a lot father than if you stay in safe territory. I always like to challenge myself a little, and see if I can take it a step farther than other bands that are in our ilk.

BK: On Snake Oil, you present some tracks on which The Fuzztones join some 60s legends – Sean Bonniwell, Mark Lindsay, etc. – reminding me of what The Smithereens did on their conceptually similar Attack of the Smithereens album. Some of these artists – like the late Bonniwell – didn’t really have a whole lot of commercial/financial success back in the 60s, but they get a sort of hero worship from us garage fanatics. What was the experience like for you, meeting and playing with these guys?

RP: As a fan, it was very rewarding. I was a huge Music Machine fan since they came out. I bought “Talk Talk” the day I first heard it on the radio. I saw them on TV many times; they influenced The Fuzztones very much in our style of presenting visually. We’ve been accused of imitating them, but I think that’s an absurd notion. Just because we have black hair we’re imitating them? Does that mean that every band with brown hair is imitating every other band with brown hair?

But then, was Gene Vincent imitating Elvis? Or…was Elvis imitating Gene Vincent? Because, look at the ’68 special. Elvis came out dressed in all black leather.

All this is so silly. It goes around; everybody influences everybody. As well it should be. If it wasn’t for The Beatles , there wouldn’t even be garage. All that matters to me is, is this stuff great, or is it not? Listen to The Beatles and you’ll hear some Chuck Berry.

BK: It’s all about taking the influences and filtering them through your own personality, your own sensibility. And if you’re any good, it’ll come out as something that’s original, but informed by those other things.

RP: Look at The Rolling Stones , for instance. First album they did, they had one original song on it. Which, I believe, was an instrumental with four chords. So it can’t really be called an original. Yet, did they have their own sound? Hell, yeah. The Rolling Stones probably spawned more garage bands than anyone else.

BK: Tell me about this documentary film that’s underway.

RP: We had many false starts. We started making a documentary maybe ten years ago. We had a woman filmmaker in Greece that was working on a documentary for several years. And then she basically got too busy, and couldn’t do it any more. So we inherited a lot of footage from her.

And then I had a couple other people get interested, start up, and then lose interest. And just this year I met a German filmmaker who’s very interested, and we started it up again.

We collected all the footage that we’d already gotten from the other filmmakers. And I’ve been collecting footage of my own career since 1976, and I have a huge collection. I have a big collection of scrapbooks with almost every article and review that I’ve ever gotten.

We just started going through all of it, scanning all the articles and photos. Then we started interviewing people; right now we’ve already interviewed about fourteen people…some very big names. And we have a lot more scheduled, people committed to be interviewed.

We think that we can finish it in a bout a two-year time frame. It’s basically a documentary on me; The Fuzztones are a very, very big part of it. But it’s about me and my life, because I’ve done quite a lot more than just The Fuzztones. And a lot of it’s stuff that people don’t know.

The plan is to get it on TV, and into the Cannes Film Festival. And then to release it on DVD.

BK: Will we ever see The Fuzztones onstage back here in the USA?

RP: Well, we really had no intention of ever coming back. And about four years ago, I believe, we were offered an American tour. And [heavy sigh] the promoter made it sound very inviting. And it turned out that if we had done it, we would have ended up at least $3000 in debt. He successfully booked the east and west coasts, but we were going to have to travel by van from one coast to the other.

And in the interim, no one in the Midwest had verified any of the shows. We ran out of time; we needed confirmation, and we couldn’t get it. So we were forced to cancel the tour. And you can hear on Snake Oil , there’s a sound bit of Question Mark on the radio, excitedly telling everyone that The Fuzztones were coming to town. And we weren’t; sadly enough, we weren’t able to do it.

We wanted to do it, because The Fuzztones never toured America. Isn’t that strange? So here’s our chance, and we never ended up getting to do it. But it was all based on a festival we were supposed to play with The Sonics . So the festival people paid our way to come, and paid us quite handsomely to do this one show. So we came over, did this one show for the Ink and Iron Festival in Orange County, California. And you know, no one knew who we were, or who The Sonics were. And no one gave a shit. And it made me think, why bother. I don’t think America is were it’s at.

So unless someone would come up with something to make me think otherwise, I can’t see how it’s really beneficial for us in any way.

BK: What led you to relocate to Germany?

RP: Part of it was a career move. Part of it was that I didn’t want to be in America any more because I don’t like the political climate. I was never able to make a living playing music in America; even at our peak I wasn’t able to. And I had met a gal here, who turns out to be our keyboard player [Lana Loveland]. We had a hot romance on the road, and it turned into more. And so I dropped everything and moved here.

I moved from Pennsylvania to New York for music, and from New York to Los Angeles for music, then I moved from L.A. To Berlin. I think there could be a lot more success for bands if they weren’t afraid to leave their turf and pursue things. But it;’s human nature to stay where it’s safe. And [laughs] I try to avoid human nature.

BK: You bring up an interesting point, one that I often think about. Whether it’s rock’n’roll or jazz or blues, there’s long been examples of artists who play American music having to go to Europe to survive, to get the respect they deserve. Why do you think that is?

RP: The grass is greener. Look at [American pop culture]. American went nuts over The Beatles, and later on David Bowie. I think that the “exotic factor” appeals to everyone. That accent that you’re not used to hearing. Or the moptops, Beatle boots and collarless jackets that we weren’t used to seeing.

BK: …were all American!

RP: We went nuts over ’em, and they were all American influences. But, I mean, how would a teenage have known that? How many teenagers listened to Howlin’ Wolf? So thank god for the Stones; I know that’s how I got into the blues.