Fuzzy Memories: A Conversation with The Fuzztones’ Rudi Protrudi, Part One

Since 1980, The Fuzztones have been leaders in keeping the garage rock flame alive. Originally based in New York City, the group – led by singer-guitarist Rudi Protrudi – eventually emigrated to Germany, where they believe they’ve found a more receptive audience. There’s been a fair amount of Fuzztones-related activity in recent years; among the latest is a new 2CD set of rarities called Snake Oil. There’s also a new Fuzztones tribute set called In Fuzz We Trust, and there’s a Fuzztones documentary film in the works. I recently enjoyed an in-depth conversation with Rudi, in which he took me back to the band’s beginnings and earlier. Here’s Part One. — bk.

Bill Kopp: In addition to serving up a couple hours’ worth of unreleased and/or rare goodies, Snake Oil does a pretty good job of outlining the Fuzztones‘ history. How did the idea for this collection come about?

Rudi Protrudi: The idea came about back in 1989 when we did Creatures That Time Forgot. That particular album came out specifically because we got a major deal with RCA and Beggars’ Banquet. We had to leave our independent label, Music Maniac. And because we were going to do that, I gave them a record to say goodbye with. So they wouldn’t get too pissed off. 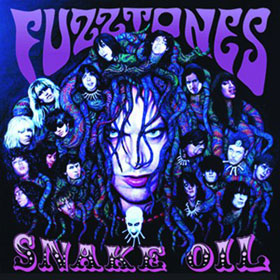 And it turned out that that album was a really big hit with our fans. It was a lot of really rare stuff, a lot of which we wouldn’t have normally put on a record, for various reasons: maybe a tune was a demo, and alternate version or whatever. Or maybe a song we didn’t think was good enough to be on an album. But in the context of a rarities collection, it has a different flavor.

So that album went over very well. It had a lot of snippets – soundbites – in between the songs. And a lot of people really enjoyed that, because it gives you more of a chance to really get to know what the people in the band are really like. Besides just listening to the music, if you hear clips from radio and TV interviews, you get a feel for what the band members are like as people.

BK: As best as I can gather, your own musical career got underway in the 60s, right around the time that garage/psych was giving way to heavier stuff like Cream, Blue Cheer and Led Zeppelin. What initially attracted you to the style, and what has kept you interested in it as it’s gone in and out of fashion over the years?

RP: When I was a teenager, this stuff wasn’t called garage; that term hadn’t come up yet. It was called Top 40. You would be hearing Sky Saxon, and The Kingsmen, Sam the Sham and the Pharaohs, ? And the Mysterians all on the radio. Right next to The Beatles and Tom Jones. It was just what they played; they might call it rock’n’roll or pop. But we as teenagers knew that it was a little different. We didn’t label it, but when you heard a song like “Louie, Louie” or “Gloria,” it really stood out as something different from The Beatles. It was more raw, and it spoke more to me because of that rawness and simplicity. And to a lot of outcasts: that particular music, I remember when I was listening to it in high school, the only kids who really dug it were greasers, outcasts, and kids who like to fight. And bad girls who teased their up and sprayed it, and wore white lipstick and heavy eyeliner. Those were the kind of people who like The Shadows of Knight, y’know?

So I always dug that kind of stuff. I always bought the singles right when they came out. And I continued to like it past its expiration date. But as a musician living in Pennsylvania, the only time you really got any gigs was if you were in a cover band, and doing whatever was happening at the moment. So I just went, with time, to different things. In the 70s I was playing rock, covers of Jethro Tull and Bloodrock and Grand Funk…whoever was popular.

And meanwhile, about 1976, I started to read a lot of stuff in Rock Scene Magazine about New York, about the scene that was going on there. Nobody had a record out yet, but there were pictures of The Ramones and Patti Smith and Blondie. And of course I had already gotten the New York Dolls‘ album. So I had an inkling of what that music might be about. It seemed to me that there were a lot of references to sixties garage and girl groups in the music. This was just from what I read and the pictures that I saw. 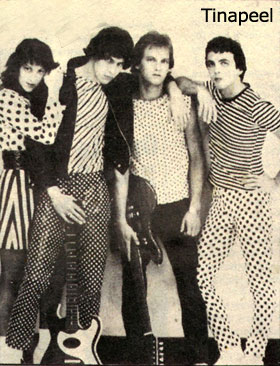 So I decided to start a band that would play the kind of music that I thought they were about. I hadn’t heard it yet, so I had to imagine what the music was like. I started writing my own songs, which turned into the music of Tinapeel. Which, in the long run, isn’t all that different from early Blondie, even though I hadn’t heard them. We were maybe a little more bubblegum-influenced; we were very sixties influenced. But it was more influenced by The Monkees, The Archies, The Ohio Express, bands like that. And dress-wise, we were right off the map. Nobody could even come close; we weren’t influenced by anybody at all. We dressed in op art: black and white, clashing polka dots and stripes and checkers. And we had a big concentric circle backdrop that we would play against. And all of our instruments, we’d do up in contact paper, with black and white designs. So if you watched the band, you’d get very dizzy! We weren’t about following a trend; we were starting one. It was fun. And we were the first band to use a combo organ.

And about three or four years later when we started the Fuzztones, I started seeing in the East Village storefront windows that they were catching on to Tinapeel’s fashion. Betsy Johnson…all that black and white mixing that we had done earlier.

And the music: what we were doing back in ’76 later became new wave. It skipped punk. We had a punk influence and a sixties influence, but the music and lyrics were really new wave, four years ahead of its time.

BK: New wave had the melodicism that a lot of punk didn’t have.

RP: Exactly. And the thing is, in New York, a lot of the early punk was pretty melodic. It was the English that changed that to a bunch of noise, I thought. I mean, I love the Sex Pistols, but a lot of the other stuff was the beginning of the end of punk, as far as I was concerned. The end of the creativity of it.

BK: So what do you think is the central, core appeal of what we’ll call garage rock? I have my own ideas, but I’d really like to know yours.

RP: Very similar to punk, in that you don’t have to be an amazing musician to play it; that’s one of the things. Because we had gotten to the point – and the punk guys always say this as well – where you had to study at a guitar conservatory to be able to play rock’n’roll. And even then, you had to make it big-time and play in concert arenas and things like that. And that’s really not very appealing to me. I like to have the interaction with the audience; I like to have them right there in front of me. When I play really huge places, I’m not that crazy about it, because I can’t see the audience. I like the up close and personal feel of playing directly, one on one, and involving the audience. And to me, the music sounds like that. 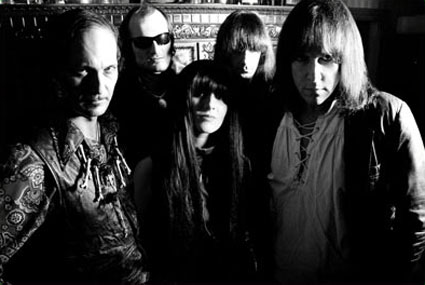 Also, I think it’s a lot more creative than music that is commercial. You know, I love the – for lack of a better word – amateur stuff. The young bands on compilations like Back From the Grave or Pebbles. I’m not talking about bands like ? And the Mysterians or the Electric Prunes, bands that had hits, even though it applies to them as well. But I think that these guys, maybe they made up for their lack of virtuosity…with imagination.

BK: Absolutely. I think of Green Fuz as the prime example of that. I interviewed them and saw them at Ponderosa Stomp. They got up and played their “Green Fuz” song. And they tried to polish it up a little bit; we were all like, “No no no no…don’t tune your guitars!”

I agree with the idea put forth that while there were thousands of unknown garage bands in the sixties, hundreds of them actually had one good song in them. They might not have had two… But there are hundreds of great, one-off songs from that era.

RP: And then you put a bunch of those together on a compilation, and that comp is better than most bands’ album!