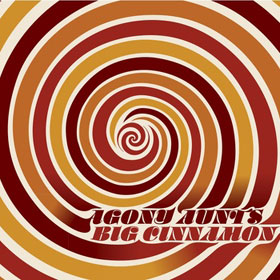 Readers of a certain age will remember an early Saturday Night Live faux commercial for a product called Shimmer. It was, we were told, both a floor wax and a dessert topping. Silly and a bit bizarre, no? Well, I would posit that Agony Aunts‘ latest album Big Cinnamon offers up a dichotomy that is every bit as odd.

The opening strains of “Twenty-four Mergansers” suggests some late sixties heavy psych, all swirls and wooziness. But the track shifts gears and, then it’s a catchy tune in the Agony Aunts’ tradition. Tradition, you say? Yes: on their previous outing Greater Miranda, this collective (made up of members of various groups on the Mystery Lawn Music label, with assistance from some some very cool friends) perfected a singular admixture of early 70s pop conventions and wordplay. And that approach is in full flower on Big Cinnamon.

With a sound that (in places) recalls candy-floss pop like The Partridge Family, one might be inclined to dismiss Agony Aunts as some kitschy throwback. But lift the lid on their sound and you’ll find all manner of strangeness going on. Folding in elements of art rock – subtle shifts in time signatures, songs with more than four chords…stuff like that – the group has a lot on its collective mind.

The lyrical concerns of Agony Aunts are quite opaque: what exactly are tunes like “Family Drugs” and “We Got the Jekyll” about? Imagine the perspective of Fountains of Wayne – songs about everyday life and situations – and then twist it into a pretzel. The result might sound a bit like Agony Aunts, if you layered it with intricate vocal arrangements and erudite lyrics. The band has a way with a rhyme, and it’s a safe bet that these songs mean something to them who wrote ’em. To the rest of us, the sunny melodies and cheeky harmonizes hold mysteries best left unsolved.

The musical arrangements feature plucky ukuleles, insistent barrelhouse-style piano, shimmering guitars, Summer-of-Love shaded drumming, and fetching vocals from KC Bowman, Karla Kane and god-knows-who-else. The band is some combination of deadly serious (“Undecimber” seems to be about something melancholy) and undeniably bent: this outfit has a serious penchant for wordplay that extends beyond their song lyrics right into the text on the CD packaging.

Extra care went into the arrangement and production; the songs float by, full of gentle clarinet figures and powerpop twin lead guitar figures (the latter especially on “We Got the Jekyll”) and another appealing sounds, most of which will stay in the listener’s head long after the last song fades out.

Perhaps a notch less immediate than Greater Miranda, Big Cinnamon is at once a more complex and fully realized record. A first listen will draw listeners in thanks to the record’s sound; subsequent spins will likely pull willing listeners farther into the skewed-pop Agony Aunts universe.