The esteemed Concord Music Group continues its series of thoughtful reissues of jazz classics from its catalog holdings with five titles originally issued on the Riverside label. I covered Chet Baker Plays the Best of Lerner & Loewe back at the beginning of the month; here’s some quick looks at the other four in this recent clutch of reissues. 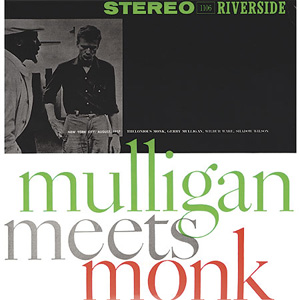 Thelonious Monk and Gerry Mulligan – Mulligan Meets Monk
These two men had wildly different styles: Mulligan’s warm baritone saxophone was the epitome of melodic jazz, while Monk’s idiosyncratic piano work always demanded a good bit from the listener. But on this 1957 date, the two giants of jazz met for two days in a NYC studio, aided by Wilbur Ware on bass and drummer Shadow Wilson. They ran through six numbers, including Monk’s already-classic “’Round Midnight” and “Straight, No Chaser” plus Mulligan’s “Decidedly” and three others. The Concord reissue presents the original LP plus four alternate takes not included on the original release. Their sparring is at its peak on the hyperkinetic “Rhythm-a-Ning,” and the rhythm section gets to blow pretty wildly here, too. The 2013 reissue includes new liner notes from Neil Tesser focusing on the Mutt-and-Jeff nature of the pairing, specifically both its unlikeliness and its unexpected success. A tour de force.

Wes Montgomery – So Much Guitar!
Until a few years ago, I only knew of Montgomery as an oft-mentioned name dropped by guitarists of certain styles. But my appreciation for him grew upon hearing Boss Guitar (reissued by Concord in 2010) and the rare embryonic work documented on Echoes of Indiana Avenue. As I read up on the man’s work, I found numerous warnings that his later material (specifically for CTI) was relatively uninspired, though I found a vinyl best-of survey of his Verve-era output a real delight. But this set, dating from 1961, finds the guitarist in a hard-charging jazz direction, with ace accompaniment by a small group (piano, bass, drums and congas). Montgomery sounds hungry here, and the ensemble is rarely less than exciting. This reissue adds eight live tracks – the entirety of 1961’s The Montgomery Brothers Live in Canada (featuring all different material), making this disc an effective twofer of prime-era Montgomery. 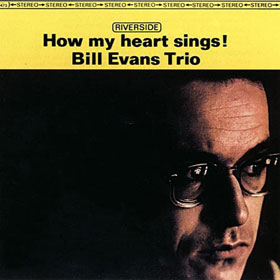 Bill Evans Trio – How My Heart Sings!
This album is rightly thought of as a companion to the Trio’s Moonbeams, recorded concurrently and released around the same time, mere months after the tragic death of Evans’ bassist Scott LaFaro. While Moonbeams was a set of contemplative ballads, this album is significantly uptempo. New bassist Chuck Israels wisely avoids trying to fill LaFaro’s shoes, instead playing in his own superb style. Only three of the tracks here are Evans originals; elsewhere the Trio reinterprets Brubeck (“In Your Own Sweet Way”), the Gershwins (“Summertime”), and Cole Porter (“Ev’rything I Love”). It’s Evans at the accessible end of his musical spectrum, and the sparkling interplay between him and his band mates is lovely. Of special note is the nice stereo separation that places Paul Motian‘s subtle brush work largely in the left channel, with Israels in the right speaker. Three alternate takes (including two previously unreleased) round out the reissue. 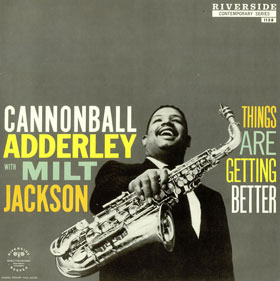 Cannonball Adderley with Milt Jackson – Things Are Getting Better
The ways in which I love this cannot be overstated. Adderley is and will remain my sentimental favorite jazz artist. And I love me some vibraphone (look for a review of Gary Burton‘s latest, coming soon). So there’s a lot to love on this 1958 pairing of the alto saxophonist/bandleader and the MJQ‘s Milt Jackson. This one really swings, and the reissue includes 44 seconds of delightful studio dialogue that shows the ease and command with which the cats created this delight of an album: Adderley instructs his players the order in which they’ll solo, and the fun they were having is supremely evident. Pointing the way toward Cannonball’s soul jazz heyday, it features compelling dialogue between his sax and Jackson’s vibes, most notably on “Groovin’ High.” Even the quieter moments (“Serves Me Right”) are exciting in their own way. This reissue includes a pair of mono alternate takes.