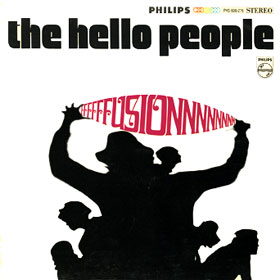 Consider this: a band with a truly left-field visual aesthetic, one that barely managed to chart, got to cut and release about a half dozen albums in the period 1968-1975. None among their members was a household name, and the band itself never became widely known, though for a time in their later years they did back a more well-known “cult” artist (Todd Rundgren). So how did a band like this get away with putting out a string of albums?

The answer probably has something to do with the fact that record labels were awash in money in those heady days. Yeah, that’s the most obvious, ready answer. But it ignores a more fundamental reason: (The) Hello People actually had some serious talent. That talent didn’t always come across on record; but then Hello People were mimes, and this was in the days long before MTV.

Yes, mimes. Onstage, they’d sing, of course, but they’d never, ever speak a word to the audience. Kind of like The Grateful Dead, but more fun.

Maybe you hate mimes the way some people hate clown or puppets. Trust me: I get it. But Hello People had the goods in a way that KISS or Insane Clown Posse never did. On their 1968 LP Fusion (newly reissued by Real Gone Music) the group traffics in a wide array of styles, showing themselves to be (if not masters) adept at each.

“White Winged Doves” (thankfully no relation to a Stevie Nicks track from the 80s) is a gentle baroque piece, full of flute, harpsichord and gentle vocals; it feels a bit like The Association, albeit without the latter’s complex vocal harmonies. Churchy organ in the second half adds a melancholy and vaguely sinister vibe. More harpsichord and flute form the basis of “Anthem,” but this barbed protest song (an autobiographical piece about singer W.S. “Sonny” [or “Country”] Tongue and his draft-resistance-related prison sentence. The band performed the track on The Smothers Brothers’ show (check it out on YouTube), where they added a pointed musical intro that made the Phil Ochs-styled song’s subject matter more explicit.

The Hello People played all their own instruments, we’re told; that fact makes “Jelly Jam” all the more fascinating. A delightful horn-led soul jazz instrumental, it has much more in common with the work of Cannonball Adderley than any of the more pop-oriented acts from whom they drew inspiration elsewehre on Fusion. Had they turned in a full album of this kind of material, latter-day listeners might think of them in the same context as Grover Washington Jr. or Gene Harris.

The musical left turns continue: once its mellow intro is out of the way, the good-timing “If I Should Sing Too Softly” feels like The Cowsills, especially with the insistent piano, jangling guitars and stacked vocal harmonies. Its varied arrangement isn’t miles away from Tages‘ “You Read Me Like an Open Book,” a group and song whose obscurity (to American audiences, at least) make Hello People seem like chartbusters.

“How Does it Feel to Be Free” is a rocked-up Monkees-styled romp with some tasty harmonica licks woven into the mix. And if listeners’ heads weren’t spinning by this point, the kitschy “Pray for Rain” sounds like it was lifted straight off a Sopwith Camel record. The only real misstep on the record is “A Dream for Tomorrow.” The tune takes things back in a baroque direction, but the too-precious-by-half result is halfway between the kind of thing Chad and Jeremy might do and Richard Harris‘ A Tramp Shining. Then the grab-bag approach sets in: “Everything’s Better” sounds like The Cowsills and Sopwith Camel formed a lite-rock supergroup. It’s interesting, with its Sgt. Pepper-era McCartney styled bas lines, but it’s a bit too lightweight and goofy for what’s ostensibly a rock album.

Some interesting percussion work and lilting flute enliven “Come and See Me,” and the AM radio flavored lead vocal crooning is successful in a BJ Thomas vein. The album concludes with “I Ride to Nowhere,” a groovy Carnaby Street-flavored tune with lyrics about windows of my mind” and such. It’s a swinging track with some tasty electric guitar runs; very much a period piece – like much of Donovan‘s work of the era – but it’s among the strongest cuts on this far-better-than-average album.

The stark album art is reminiscent of Syd Barrett‘s design for the back cover of The Pink Floyd‘s Piper at the Gates of Dawn, released a few months before Fusion, in 1967. Gene Sculatti‘s new liner notes for the RGM reissue put the band into some useful context; he makes his own pop-culture comparisons between the Hello People’s music and that of their contemporaries. Some photos not included in the 1967 LP round out this nice reissue of a forgotten gem.