Album Review: Hackamore Brick – One Kiss Leads to Another 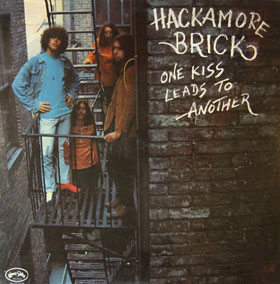 I don’t deliberately set out to be a contrarian, but it often works out that way. One good example: like most rock critics, I count myself among the fans of The Velvet Underground. But here’s where I go all oppositional: I think their finest work is Loaded. Though I value and enjoy John Cale‘s contributions to the band, the post-Cale pop-oriented Loaded is, for me, the band’s most consistent musical statement. It’s also the only VU album I can actually listen to all the way through.

So with that milepost established, perhaps it’s little surprise that I found the Real Gone Music reissue of an obscure album by a little-known band a real delight. With a title like One Kiss Leads to Another, one might expect some sort of pop piffle confection, or a lightweight romantic musical outing, but in fact this little-known 1970 album from Hackamore Brick is nothing of the sort. The fact that it was originally issued on Kama Sutra – a label known primarily for bubblegum, a label more closely associated with The Jaggerz (The Rapper”) and Sopwith Camel (“Hello Hello”) than anything leaning much in a rock direction – might render it even more suspect.

But if one looks and listens beyond that, what one finds is an album that sounds like, well, Loaded.

Hackamore Brick only cut this one LP, and they’re so obscure that Wikipedia doesn’t even have an entry on them. But as one-offs go, One Kiss Leads to Another is surprisingly strong. The title of “Oh! Those Sweet Bananas” even sounds like a takeoff on a Loaded tune (“Oh! Sweet Nuthin’”), and the track sounds a bit like “”Rock & Roll.” And “I Watched You Rhumba” sounds like a doppelganger for “”Head Held High” or “Cool it Down.” (You can play this little game with most all of the album’s ten tracks; less so with the bonus cut, an inventive rethink of the Leiber-Stoller classic “Searchin”.)

Curiously, Tommy Rettman‘s liner notes make no mention of any sort of VU connection (Loaded was cut in New York City’s Atlantic Recording Studios in summer 1970; little info about One Kiss exists, but we do know that it was cut at NYC’s Bell Sound, and released at the end of 1970. So one has to wonder, no?)

Richard Robinson‘s production is very dry, very demo-y, and that aesthetic fits the songs well. Tommy Moonlight‘s “Radio” sports some just-loose-enough vocal harmonies, but on most of the track, the lead singer does a tuneful take on Lou Reed‘s approach. Prominent use of keyboards (electric piano and combo organ – the latter, probably a Farfisa) is the most defining characteristic of the band’s musical approach (and the primary way in which they sound different from the Velvet Underground). The lengthy keys-centric interlude on “And I Wonder” is the instrumental highlight of the album, and totally unexpected in light of what has come before it.

Rettman’s liner notes put some needed meat onto the skeletal info about the band; suffice to say that they followed a familiar story arc: the got together, got better, got signed, cut an album, got pushed around by the label, broke up, and faded away. All in the space of a relatively brief period of time. But the half hour or so worth of music they left behind deserves a wider hearing. To that end, the original band’s two mainstays (Moonlight and Chick Newman) reformed in 2009 to perform some of the material live. Rettman suggests that Hackamore Brick deserve to be spoken of in the same sentence as Blue Ash; that might be overstating it a bit, but then again, perhaps not.