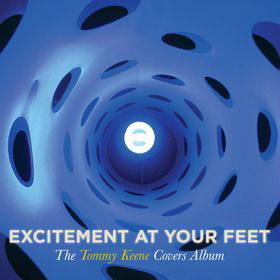 There’s a fascinating thread that has run through my interviews with recording artists over the last several years. Not surprisingly, many of my favorite musicians are also world-class fans. And in the more in-depth conversations, talk has often turned to our shared admiration of the work of some other artist. Many of these people – quite fine and highly esteemed artists in their own right – are superfans of the highest order, and delight in discussing people like Brian Wilson, Syd Barrett, Miles Davis, Roky Erickson, John Fogerty and so on.

Many of them are collectors and crate-diggers, as well, and they possess large music collections, whether vinyl, CD or digital (but often vinyl, ’cause, y’know). And like me, many of them have a particular fascination for obscure artists, rarities, and what the FM deejays used to call “deep album cuts.”

Tommy Keene is one of those artists who’s a music superfan. So in addition to talking with him about his latest releases (I’ve had the pleasure of interviewing Keene twice, once in 2006 and again in 2011), our conversation included discussion about music we both enjoy. So it comes as little surprise that Keene occasionally drops the odd cover onto his albums. His major-label breakout LP Songs From the Film (1986) included a reading of Lou Reed‘s “Kill Your sons,” not exactly an oft-covered nugget.

But now he’s gone full-bore and put together a full album of covers, and it’s quite a left-field collection. True, the list of artists covered will not surprise longtime Keene fans, but the song selection likely will. Other than a cover of Donovan‘s “Catch the Wind” (previously covered by artists as diverse as Paul Revere and the Raiders, Buck Owens, Cher, Eartha Kitt and Sammy Hagar), the tracks on Keene’s Excitement At Your Feet are not typical cover-band fodder.

But they’re uniformly excellent, and Keene makes an effort to apply his own singular stamp to his versions. While the album title takes its name from The Who‘s 1969 “See Me, Feel Me” (from Tommy…are you keen enough to get it?), when Keene digs into The Who songbook, he comes up with “Much Too Much,” a largely-forgotten track off their 1965 debut LP The Who Sings My Generation. From its a cappella chorus opening to the insistent grooving, it’ll send listeners back to their old Who albums to seek other overlooked gems.

When Keene covers The Flamin’ Groovies‘ “Have You Seen My Baby?” he makes the song his own. Maybe it’s his distinctive voice; not exactly your typical rock god set of pipes, it’s quite appealing and often adds an everyman feel to songs. Whatever: he rocks out with just the level of abandon one would require of a Groovies cover, right down to a “woo!” at the song’s end.

Keene removes to psychedelic production flourishes from Echo & the Bunnymen‘s “The Puppet,” and in doing so emphasizes the hard rock flavor within the song’s grooves. He imbues the track with a bit of a Revolver-era vibe, too; never a bad thing, that.

Things are dialed way down for an elegaic reading of the Bee Gees‘ “I Laugh in Your Face,” from their flocked-cover 1969 double LP Odessa. Keene’s ability to turn in a soaring ballad arrangement is too often overlooked, and this one’s a beauty.

Mink DeVille is perhaps the least well-known artist covered on this set, but Keene’s “Let Me Dream If I Want To” show his mastery and understanding of new-wave-ish rock is every bit the equal of his command of classic/60s rock. And Keene’s arrangement here (as on all the other tracks) never leans in a retro direction; not only does he make the songs sound like he wrote ’em, he makes it sound like he wrote ’em this year.

Eleven tracks in all, Excitement At Your Feet delves into the catalogs of Television, The Rolling Stones, Guided by Voices, Big Star and Roxy Music as well, but again, in each case the song selection isn’t what you’d guess on your first (or fifth) try. Here’s hoping that Keene enjoys well-deserved commercial success on a par with the similarly-themed Sid’n’Susie (Matthew Sweet and Susanna Hoffs) Under the Covers series; if that happens, perhaps we’ll be treated to Even More Excitement At Your Feet.