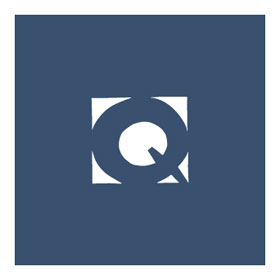 The music scene likes its labels, it it has always been thus. It’s the rare band that defies easy categorization and still enjoys some measure of commercial success; one has to play the game to win, so to speak. But one band that critics and others never really could pin down stylewise was Atlanta’s Swimming Pool Q’s. They hit the scene in the era of Athens/Atlanta scenesters R.E.M., Pylon, the B-52’s, the Swinging Richards, the (Georgia) Satellites, The Producers, The Coolies and other regional successes, but sounded resolutely unlike any of those other acts. With their two lead vocalists (guitarist Jeff Calder and Anne Richmond Boston), there were – though I only hear it now in retrospect – some sonic similarities to Jefferson Airplane/Starship, specifically when the two would sing together (Calder’s smooth yet husky pipes sound a tiny bit like Paul Kantner).

But if Anne Richmond Boston’s richly clear and distinctive voice invites comparison to anyone, it’s Christine McVie of Fleetwood Mac; both singers have voices that cut through their musical backing, but do so in a way that never slices, never leaves a scar. 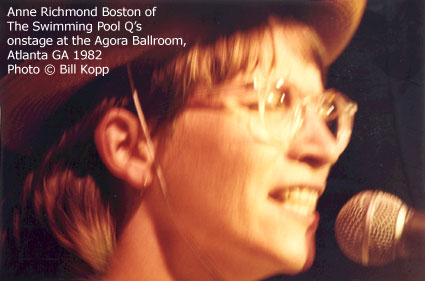 All those comparisons aside, musically the Q’s had more in common with the intelligent end of the powerpop spectrum, though that comparison only works so far, too. The Swimming Pool Q’s really were an anomaly: clever, catchy songs with hooks, superb vocals and an overall sonic sheen that – while not really “new wave” in any real sense – appealed to those listeners attuned toward newer sounds.

The band never hit the national charts in any meaningful way, but in the wake of their 1981 indie release (on dB Recs) The Deep End, they were successful enough to get picked up by A&M (that label did its best to make forays into the “new rock” scene of the 80s, with mixed results). For that established national label, they cut two albums: the self-titled 1984 release and 1986’s Blue Tomorrow. Like so many other excellent bands of the era, they would return to smaller labels (in their case, back to dB) for subsequent releases, and though they have endured some personnel comings-and-goings, the group continues to this day. 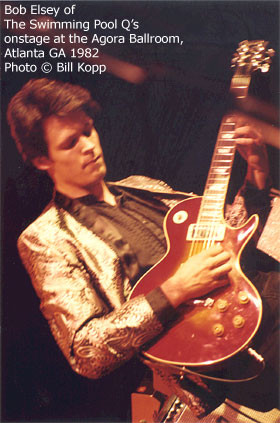 The two A&M albums are now reissued as part of an impressive box set titled The A&M Years. With an additional 17-track disc of demos and rarities called Pow Wow Hour, the new set includes detailed liner notes as well. But it’s the music for which most will come to this set, and that music has stood the test of time quite well.

There are a few sonically dated flourishes on the pair of A&M albums: a gunshot-snare here, a now-dated synthesizer patch there, an occasional pig-squeal guitar line. But overall, the double-whammy of opening tracks “The Bells Ring” and “Pull Back My Spring” show why the Q’s deserved their major label shot.

“Purple Rivers” features an instrument that sounds like a hybrid of a synth and a mandolin, and Richmond’s soaring voice recalls Vicki Peterson of the Bangles. While the band was never part of any of the “paisley underground” revival or the harder-edged punk scene, modern-day listeners might hear similarities to Rain Parade (their instrumental approach) and X (the male-female vocal harmonies). The Swimming Pool Q’s could deftly weave in Southern touches (mandolin, even a splash of banjo) without sounding especially Southern. And skewed tracks like “She’s Bringing Down the Poison” showed that the band would bristle at pop convention, always staying ambitious enough to keep things interesting. The chiming guitars were often offset by spooky (but judiciously used, in this era of profligate overuse) synthesizer lines.

The cover photo and the opening synth patch of Blue Tomorrow might suggest to first-time listeners that the group had softened its approach. But Blue Tomorrow is every bit the stylistic equal of its predecessor (and perhaps even a notch better). “Now I’m Talkin’ Bout Now” takes its sweet time to unfold, but it’s worth the wait. The snaky surf-n-spy “She’s Lookin’ Real Good (When She’s Lookin’)” is the Swimming Pool Q’s hit that never was (but should have been). And “Pretty on the Inside” is a shimmering pop tune of the first order as well. 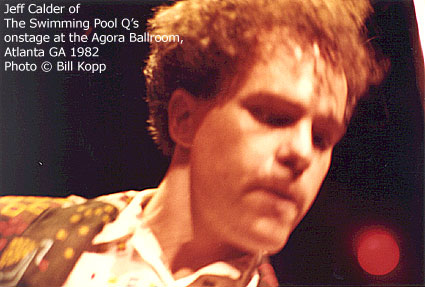 Elsewhere, the band show their mastery of styles on “Laredo Radio” (shades of The Blasters) and the insistently rocking “More Than One Heaven.” The last of these features Boston harmonizing beautifully with herself while the band lays down ace backing. Only the drum sound pegs this otherwise timeless tune as mid-80s. A big guitar sound on “Corruption” evokes memories of Guadalcanal Diary, while Calder’s mannered vocal is redolent of Wall of Voodoo‘s Stan Ridgway. And restrained-yet-expressive use of synthesizers leavens the Southern vibe of “Blue Tomorrow,” in which The Swimming Pool Q’s sound their most dB’s-like. Boston shows off her stunning vocal control and range on the lovely “A Dream in Grey,” the best Fleetwood Mac song the Mac never wrote. A remake of the band’s “Big Fat Tractor” sounds like a rocked-up B-52’s, with Boston doing her best Kate Pierson impression; yet the end result betters any thing the B-52’s ever did.

The bonus disc is full of ephemera and odds-and-sods, yet it holds up quite well as a pure listening experience. Alternate versions and demo run-throughs are alongside non-album tracks; the result is as close to a “legitimate” album as can be expected of a comp of this sort.

Taken as a whole, this package chronicling the major-label era of this under-appreciated band is well worth seeking out by anyone who appreciates the best of that era’s music.

Note: Growing up in Atlanta, I saw the band several times onstage. The photos shown here are from a 1982 gig they did opening for Split Enz on the latter’s Time + Tide tour.