Album Review: Various Artists — The South Side of Soul Street 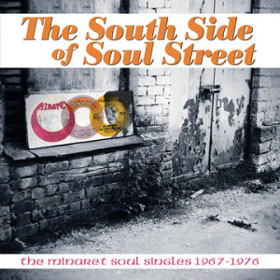 Not meant to diminish in any way the staggering contribution Stax made to popular music, but that Memphis label was not the be-all and end-all for quality Southern soul music of the 60s and 70s. And while every time a compilation of previously-overlooked music comes out – Los Nuggetz, for example, or the deep-archival comps curated by Keb Darge or Kris Needs – I find myself thinking that the well will have run dry, here we are yet again.

Founded in 2010 – yes, mere months ago – Omnivore Recordings has already staked out its reputation as one of the few go-to label for thoughtful compilations and reissues. Forty sides from tiny Valparaiso, FL-based Minaret Records are collected on the peerless 2cd set, The South Side of Soul Street: The Minaret Soul Singles 1967-1976.

The indie label based in Florida’s panhandle had access to a stable of singers, players and writers who – at their best – rivaled Memphis’ Stax in terms of quality. What Minaret didn’t have, critically, was access to a national distribution network. So soul-shaking sides by the likes of Doris Allen (“A Shell of a Woman”) and Big John Hamilton (“The Train”) went unheard and unappreciated by the record-buying public of the era.

The uninitiated might assume that Minaret singles were made-on-the-cheap affairs featuring third-string musicians and arrangers. But that’s simply not the case. Often availing themselves of Fame Studios in Muscle Shoals, AL, Minaret produced some very high quality recordings. Apparently the 700-mile round trip wasn’t too daunting a prospect for Minaret recording artists. Label head Finley Duncan and renowned producer Shelby Singleton (best known for his 1960s productions at Smash Records) guided their artists through sessions with ace players from across the South.

And even the Minaret b-sides are strong: Gable Reed‘s flip “Who’s Been Warming My Oven” is a lyrical cousin to Detroit’s 100 Proof (Aged in Soul) and their 1970 stomper “Somebody’s Been Sleeping.” Big John Hamilton – a soul shouter with nuance in the Otis Redding tradition – paired with Doris Allen for several singles (all excellent) including a reading of Buddy Miles‘ “Them Changes.” Few of the other songs on this set will be familiar to most listeners, though Hamilton’s 1969 b-side “Before the Next Teardrop Falls” would be a hit when recorded some five years later by Freddy Fender. Likewise, most hearing these tracks for the first time won’t know much (if anything) about such artists as The Double Soul, Willie Cobbs or Johnny Dynamite, but Bill Dahl‘s excellent liner notes hit the high points in his signature clear and concise style. The South Side of Soul Street is that rare set that works both as historical document and highly enjoyable listening experience.

Note: in 2006, Sundazed released their own Minaret compilation, with the similar title A Fine Time: The South Side of Soul Street (named after Genie Brooks‘ 1969 b-side). That single-disc set contains eighteen tracks, fourteen of which appear on the Ominvore set alongside 26 others.