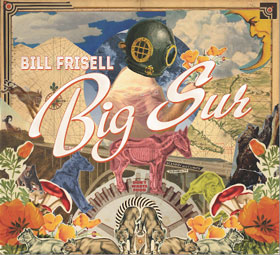 Avant-jazz. Atonal no-wave. Country. Noise rock. Americana. Those are just a few of the musical idioms within which guitarist Bill Frisell has worked in his thirty-plus years as a recording artist under his own name. With literally dozens of albums to his credit Frisell is unafraid to explore new territory; his musical eclecticism makes, say, Neil Young look unadventurous by comparison.

Frise’ll both a “serious” artist and one who can – when he wishes to – be capable of crafting some very melodic, accessible music. At his best, he keeps both of those qualities to the fore. The latest example of this is Big Sur, an instrumental album that might be termed chamber pop/Americana, though either of those labels is too limiting. Combining the personnel from two of his outfits The 858 Quartet and Beautiful Dreamers, the result is an ensemble that features plenty of classically-leaning string work (Eyving Kang on viola, Hank Roberts on cello, and Jenny Scheinman on violin) with Frisell’s guitar plus drummer Rudy Royston. This configuration means that the group can stomp with some percussion (as on the exceedingly brief “A Good Spot”), turn in a moody work such as “Going to California” (no relation to Led Zeppelin) and “The Animals,” crank out in a vaguely surf-rocking style (the snappy and delightful “The Big One”) or paint a lovely, pastoral sound picture as on “Gather Good Things.”

Big Sur is the result of a commission by the Monterery Jazz Festival, but curiously, the one musical style that listeners will find precious little of here is jazz. Now, with its plucked upright-bass-sounding lower end textures, “Highway 1” comes close to jazz. But skronky electric guitar makes a rare appearance (albeit buried in the mix; Frisell seems intent to give his band mates the limelight on most of Big Sur) for the song’s second half. The sounds veer close in places to the sort of thing Van Dyke Parks might craft, and it’s easy to imagine snippets of Big Sur’s songs edited into “bumpers” on NPR programming.

Varied and charming, Big Sur reveals its nuanced depth on repeated listenings; it’s not the most immediate of albums. On first spin, I wasn’t quite sure what to make of it. Frisell is unrestrained in his desire and ability to combine styles, and to jump from one style to another. But time spent with Big Sur – a work designed to capture in music the grandeur of California’s coastal region – is time well spent.