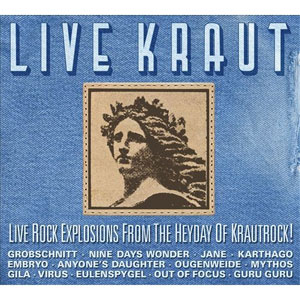 I discovered this internet thing about nineteen years ago. Ever since then – more so once I became Editor in Chief for a now-defunct print magazine, and even more so in the last four years since I launched this blogzine – I have connected with all manner of new and wonderful people. I’ve made friends with like-minded music fans, people I would never have otherwise met. The loss would have been mine.

Among those is my friend Ulli Pfau. As curator of the relatively new (but already quite venerated) Jazzhaus label, he oversees archival releases of never-before-available jazz sessions from classic artists. We’re almost exactly the same age, Ulli and me, and thus our non-jazz tastes in music have a good deal of overlap as well. In one of our conversations, I let slip that I’m a fan of most all Krautrock I’ve heard. Now, Krautrock is not (as it might seem at first blush) a pejorative term. No, it is, according to Wikipedia, “an umbrella term for the rock and electronic music influenced music that originated in Germany in the late 1960s.”

Now, I hadn’t heard a lot of the stuff. Krautrock never made huge commercial inroads in North America. Yes, there was/is Tangerine Dream, but that’s about it (Scorpions ain’t Krautrock, nor were Silver Convention, Trio nor Nina Hagen). About the only act I knew in the genre was, for many years, Grobschnitt. But I had heard bits of the genre on Pandora and other places. And I liked what I heard.

So I was quite pleased several months ago when Ulli wrote to tell me that he had stumbled upon a cache of classic Krautrock LPs at a local record shop in Germany. Once we sorted out the shipping and so forth, I found myself with a pile of (unsurprisingly) well-cared-for albums by the likes of Jane, Eloy, Birth Control, and many other non-household names. The stuff was out-there and way-cool.

I figured that would pretty much be it for awhile; none of these artists’ catalogs are widely available in the USA, and since vinyl remains my preferred format, I figured I’d have to make do. Which was fine. But when I discovered a new compilation called Live Kraut: Live Rock Explosions from the Heyday of Krautrock!, I was quite excited. Even on CD, I would probably dig this.

And dig I did (and do). This various-artists collection brings together thirteen live tracks (one from each band on the set), all but two recorded in (West) German clubs in the period 1972-1979 (two tracks are from the early 1980s).

As it happens – and I didn’t know this – Krautrock wasn’t all that popular in Germany, either! So the artists on this set were and remain decidedly underground. But that fact is no reflection on their merit. This is some adventurous, weird and rocking (and/or jazzy, in an Albert Ayler kind of way) music. Not for the faint of heart, the Krautrock selections here aren’t pop tunes; the sonic approach of these bands tended toward uncompromising, loud, unsubtle, and improvisational. But if those words don’t scare you off, then you might well enjoy these stylistically varied tracks – often sung in English – by Nine Days Wonder, Gila, Karthago, Guru Guru, Eulenspygel and others. Technically, all of these cuts have appeared on other live albums, but hey: good luck finding the originals – or anything by any of these artists – without a good deal of effort. As a sampler into the world of live Krautrock, this can’t be beat. (There’s also, I’ve learned, a JazzKraut compilation; I’m gonna have to hear that, too.)

The discographical information on Live Kraut provides enough info to set intrepid musical travelers on a path to find more along these lines, and while the English translation of the liner notes is a bit clumsy, it’s worth reading to put the compilation into its proper historical and musical contexts.