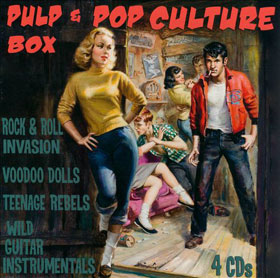 You know what’s cool? When the compiler of a collection of music makes no outsized claims of cultural import about the music. Sometimes it’s art, for sure, but sometime, it’s just…fun. That’s certainly the case with Rock Beat’s new Pulp & Pop Culture Box Vol. 1. One hundred-plus tracks filling four CDs, it’s jam packed with weirdness, novelty and the aforementioned fun.

The package is nearly divided into four thematically-defined discs: Rock & Roll Invasion features 1950s and 60s sci-fi- and space-themed rockers, very few of which will be familiar even to genre aficionados. The 1963 hit single “Martian Hop” by The Ran-Dells is probably the most well-known cut on the disc; the others feature such non-luminaries as Lonnie Miley, The Rebelaires with Sammy Smith and Dick Robinson and His Makebelievers. (Yeah, me neither.) An assortment of movie trailers is scattered among the between-song spaces; the most notable of these is a suitably over-the-top spot for the classic Plan 9 From Outer Space.

The Voodoo Dolls disc features 25 tracks, all but five of which sport “Voodoo” or a variant thereof in the title. Some more nutty film trailers for radio broadcast – such as one for Voodoo Woman – round out the set. Best song title: “It’s Your Voodoo Working” by Charles Sheffield. Taken as a whole, the Voodoo Dolls set is a better collection of music than the first disc, featuring as it does a wider stylistic selection full of r&b and more.

The Teenage Rebels disc can be thought of as a sort of no-stars answer to Rhino’s Loud, Fast & Out of Control: The Wild Sounds of the ’50s box set. The narrator of the must-hear one-minute “Sex Education” instruction record assures us that it’s “not intended to be followed word-for-word.” Thank goodness for that. The sly compilers make sure to follow that cut with John & Jackie‘s “Little Girl” from 1958, which is positively (and delightfully) smutty. Its inclusion makes the whole damn set worth owning, though there are plenty of other delights within.

And the fourth disc, titled 1960’s Wild Guitar Instrumentals is just that: two dozen trashy instro-rockers full of twang, reverb and pluck. A highlight of this set is Alfredo Mendieta‘s 1959 single “Chicken Run,” a thinly disguised rewrite of Link Wray‘s “Run Chicken Run.” Originality aside, it’s a helluva lot of fun. And not only are the listings of band names a hoot – Angie and the Citations, Jack and The Ripper, The Abootay’s (sic) – but the cover art featuring a King Kong cousin terrorizing a city (London? Rome?) with a giant Stratocaster simply must be seen.

Each LP-sleeve style inner slipcase provides perfunctory track info – title, artist, release year, label and matrix number — but in keeping with the set’s hey-it’s-just-pulp aesthetic, no weighty liner notes are included. Instead a brief one-sheet more or less instructs the listen to just go listen and have fun.

Some call it trash, some engage in oxymoron-coining and call it trash culture. I call it a delight and recommend it to anyone with a sense of humor and a taste for the, well, trashy.