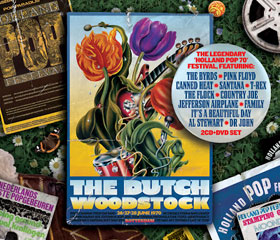 I’m a hardcore Pink Floyd fanatic. Yeah, one of those lot who insists that the stuff they did before The Dark Side of the Moon is filled with untold riches. The sort who (allegedly) has over 200 lossless audio documents of Floyd concerts, some dating back to the Syd Barrett era (though you can’t hear Syd’s vocals on the low-fidelity bootleg tapes).

And among Floyd aficionados of my stripe, there has long existed an item on that short-list of Holy Grail artifacts: the group’s performance at a 1970 Dutch festival. The group’s entire performance in audio does exist as a bootleg unimaginatively titled Kralingen Pop Festival 28.6.70. But the audio fidelity is pretty dodgy, even for a tape of the era.

But clips from a concert film documenting the festival formed the basis of a little-seen West German theatrical film called Stamping Ground; that 1971 film included Pink Floyd performing two popular set-pieces, “Set the Controls for the Heart of the Sun” and “A Saucerful of Secrets,” both originally from their second LP. Stamping Ground has never gotten a video release, and so the Floyd clips have circulated only amongst hardcore traders.

Until now, that is. The 2013 set breathlessly titled The Dutch Woodstock brings together a DVD that contains all of Stamping Ground plus other footage presumably cut from the finished film. The package also includes two audio CDs that offer up even more music; the contents of the DVD and CDs don’t match; there are a number of performances unique to one or the other.

The audio is still a bit iffy, but it’s heads above the bootleg versions. In all likelihood the CD concert audio was taken from the audio strips of the 16mm or 35mm film shot at the festival. And while the packagers of this 2013 set may have gone a bit overboard by hyping Kralingen Pop as a “Dutch Woodstock,” the lineup is quite impressive.

A mere ten months after the legendary festival on Max Yasgur‘s farm, the festival aesthetic was in full flower (despite the December ’69 nightmare of Altamont), and across Europe, all manner of festivals were put together. Riding high on the success of their triumphant Woodstock set, Santana are spotlighted at Kralingen; the CD and DVD both feature three high-energy tunes: “Gumbo,” “Savor” and “Jingo.” And a few other top-billed marquee names were in attendance. Besides Pink Floyd, both The Byrds and Jefferson Airplane turned in well-received sets.

But it’s some of the lesser-known acts that make The Dutch Woodstock especially appealing. Soft Machine‘s “Esther’s Nose Job” (from Third) gave the concertgoers some progressive jazz, Dr. John served up his New Orleans-styled goodness with “Mardi Gras Day,” and a very Airplane-sounding It’s a Beautiful Day rocked out with “Wasted Union Blues.” Other artists included Canned Heat, Country Joe McDonald, a just-pre-glam T. Rex, Family, The Flock, and a solo acoustic Al Stewart. The most obscure acts here include the wildly eclectic East of Eden, Dutch group Cuby & the Blizzards, and the all-but-unknown (but interesting) Quintessence.

In all, The Dutch Woodstock shows how the influence of the real Woodstock concert manifested itself; for a few shining years, one could catch acts of a dizzying variety all within a three-day festival. Those days would go away as the era of corporate rock arose, but thankfully, modern festivals such as Bonnaroo present a modern-day facsimile (if not quite equivalent) to the festivals of yore. For an eclectic audiovisual various-artists live set documenting the music scene in 1970, you’d be well advised to pick up The Dutch Woodstock.