A Conversation with Ray Manzarek 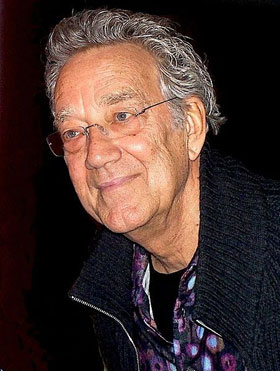 This feature is based on my previously-unpublished 2011 interview with the late Doors keyboardist. – bk

“I used to play in a band called The Doors.” That deadpan, unprompted statement from Ray Manzarek came about two minutes into our August 2011 phone conversation. I had scheduled an interview with the keyboardist to discuss his involvement in an odd-duck new album project from the enigmatic Sly Stone (that resulting feature is here), and since we had a limited amount of time, I had planned to confine my questions to that subject. But Manzarek was – fortunately for me, as it happens – quite eager to discuss much more than that.

“That,” he continued, “was before your time.” I assured him that, no, it wasn’t, and that I own quite a few Doors LPs.

Manzarek preferred the warmth of vinyl, too: “You know how I can tell the difference,” he explained. “The organ. The Vox organ on the Doors albums. Let me listen to vinyl of the first album, and then let me listen to digital. Where is that round, rich warmth? It’s not there!”

The first time I finally got a CD player and brought it home,” he continued, “I played some Yo Yo Ma cello, some Bach cello solos. These were actually digital, DDD recordings. And my wife said, ‘Get it off! What is that sound? What is going on? I feel like my nerves are being scratched and rent and torn!’”

An unsympathetic listener to our conversation might have remarked that we sounded like a pair of cranky old guys. I moaned about MP3s: “Somebody decided it would be a great idea to create low fidelity versions of popular music and then share those!” He concurred, comparing the act of listening to an MP3 player to that of being a “teenager with a transistor radio in 1958.” It went on like that for some time; we both laughed a lot, neither of us seeming in a great hurry to discuss that Sly Stone album.

“We lived in L.A. – now we’re up in northern California, near Napa – and back then we used to go to a Japanese stereo store,” Manzarek told me. This was back when “the Japanese were flush, when they owned Rockefeller Center. [Travelers from Japan] would come visit Los Angeles, and stop in at this stereo shop in Little Tokyo to get their American equipment. We’d drool over that place. The equipment was to die for: ‘Gee, if I only had five thousand dollars for a set of speakers!’ The tubes were gleaming; they had everything [turned] on in there.”

“Then we’d have some sushi next door. But we never bought anything from the shop,” he chuckled. “But what a dream factory that high-end stereo shop was.”

Asked about his keyboard technique, he joked – he was in a jovial mood throughout – that “I’ve got ten maniacs at the end of my hand. They’re irresponsible, and I am not responsible for three-quarters of the things they do. I just put the headphones on and go, ‘All right guys, there it is…play something good!’”

Having covered the Sly Stone subject, we pivoted. “You’re not allowed to talk about Translucent Blues, the album I have coming out with Roy Rogers, noted slide guitar player?” Of course I’m allowed, I laughed. He went on to tell me that Rogers had worked for a number of years with John Lee Hooker, and that Rogers’ and Manzarek’s project grew out of a “common love for the blues.” 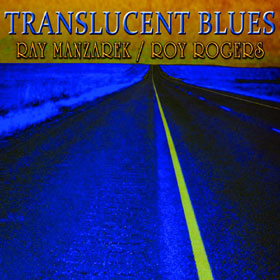 The pair had done a number of gigs during which they told stories and played blues, as well as pieces by Miles Davis, Érik Satie and other works. He characterized those events as “an evening of ballads and blues and storytelling.” Their goal with Translucent Blues was to “make a 21st century blues recording, expanding the traditional twelve-bar blues form.” For song lyrics, they adapted poetry by some friends, including Michael McClure and Jim Carroll. And “Warren Zevon gave me two stanzas before he exited the planet,” Manzarek said. “We took those poets’ words and adapted them, and adapted the blues, so the result is that the two forms marry each other.”

I thanked him for his time and prepared to end our conversation, but he wasn’t finished: “Maybe you can’t ask any Doors questions, but I can tell you some Doors facts,” he laughed. “2011 is the 40th anniversary of the death – and/or disappearance – of Jim Morrison. He died on July 3, 1971. And on that same day [in 2011], Robbie [Krieger, Doors guitarist] and I were in Paris [too], playing with the Ray Manzarek / Robbie Krieger of the Doors Band. And that night we went to the Paris graveyard Père Lachaise with some incense, and had a moment of silence with a whole mob of people. The fans were out, and so were Robbie and I. It was very quiet, and very beautiful. “And then that night,” he continued, “we played at Le Bataclan. It was packed, hot, sweaty and crazy. By the end of the show, the French fans had gone into a frenzy. We concluded the set with ‘Touch Me’ [from 1969’s The Soft Parade] – by then they were just frantic – ‘L.A. Woman,’ and ‘Light My Fire.’”

Somehow our conversation turned to the joys of vinegar-based North Carolina barbecue, and talk of the Manzarek-Krieger band’s tour dates, none of which would bring them to the Carolinas. “You know what?” he offered, “Check our schedule, and if your travels happen to take you to where we’re playing at that time of the year, just give me a call. I’ll put you on the guest list – you plus one – and you can come to the show.”

Sadly, that would never happen. Translucent Blues would be the final recorded project* from Manzarek; he himself “exited the planet,” as he would say, on May 20, 2013 after developing bile duct cancer.