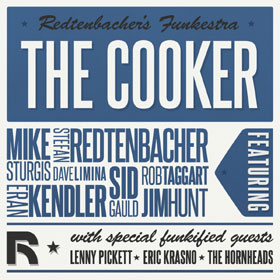 A very good friend of mine – a drummer and a serious student of music – has, in the last several years, become quite wary – cynical, almost – about musical genre labeling. In his case, it’s the term garage rock. “I can’t tell you how many times,” he’ll say, “that some band has advertised themselves as ‘garage rock,’ and then I’ll go out to the show, only to find that they’re nothing like that at all.” His point is that the terms are abused and mangled to the point of meaninglessness, that acts will latch onto whatever they think is au courant and call themselves that. Bait and switch at worst, ignorance at best.

To some extent, he’s right. I’ve been victim (okay, “victim” is too strong a word) to some musical marketing misdirection myself. Most of us have, I should think.

But some things are undeniably the real deal: not slavish recreations, not museum set pieces. And The Cooker, the new album from Redtenbacher’s Funkestra is one of those real things. Across thirteen tracks (plus three bonus cuts), this outfit churns out some precise yet oh-so-funked-up instrumental music.

Maybe it has something to do with the fact that a bassist (Stefan Redtenbacher, also on Minimoog) is leading this outfit (four players plus a US or UK horn section on various tracks, and auxiliary percussionists). There’s seemingly something about a bassist’s understanding of the importance of groove that makes large-ish ensembles work well; in less capable hands it would start to sound like a marching band.

Some thrilling string section work makes “Funky Barbarella” sound like an ace soundtrack cut from a 70s urban crime drama (a la Shaft). The guitar and bass are in tight lockstep on “The Oracle.” Some lively Fender Rhodes holds things down on “Bo & Rhino.” For a few perilous seconds during its intro, “The Whip” threatens to head into Blood, Sweat & Tears territory (intentionally or otherwise referencing “Spinning Wheels”), but thankfully the Funkestra has much groovier things on its collective mind than watered-down, white-bread funk. “Triple X” is updated big band swing. And “One Afternoon in Tunesia” [sic] is a sexy, soulful outing worthy of Isaac Hayes.

All the cuts deftly balance the looseness that funk requires to breathe with the precision that it needs to hold together. While solos abound – on pretty much every instrument that appears on the album, actually — it’s always first and foremost about the ensemble and its groove. The Funkestra’s recipe is deceptively straightforward: lay down a hooky riff, one that’s appealing in and of itself. And then layer it with some tasty soloing, beefed up by the The Jericho Horns (the five-piece UK-based section) or The Hornheads (the USA-based five-piece).

Some marquee-name guest stars drop by – tenor saxophonist Lenny Pickett and former Soulive guitarist Eric Krasno – but the aptly named The Cooker is a winning album even without their impressive contributions.