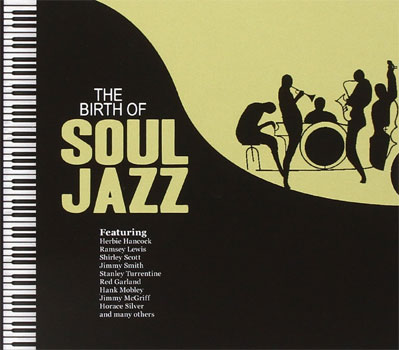 Early on into my jazz odyssey* of discovery, I found that although I very much enjoyed bop, swing, free and fusion, the style of jazz that resonated most for me was soul jazz. In my unschooled manner, I tried to articulate what exactly it was about soul jazz that made it work for me in a way that, say, Dixieland (trad jazz) often does not.

Reading a bit about how the various forms developed, I came to an initial conclusion that – while it made some sense to me – was wide of the mark. I characterized soul jazz as what happened when serious jazz players (often in the hard bop or West coast styles) decided they’d had enough of scrounging for gigs, and decided to go pop. They’d scale back the exploratory, improvisatory nature of their pieces in favor of tunes that were, to put it plainly, more accessible.

I’ve learned more since forming that early opinion. While there’s an element of truth to that description, in general the development of soul jazz wasn’t so cynical a phenomenon. In fact, as Charles Waring‘s delightfully concise and detailed liner notes for the new 2cd set The Birth of Soul Jazz explains, in fact the genre is based more on gospel forms. Specifically, the call-and-response nature of African-American “spirituals” and gospel, not the major-chord variety that influenced country and western music. The result of this hybrid adds back in some of the “heart” that some listeners find wanting in the more cerebral styles of jazz. Soul jazz, you can feel.

The heyday of soul jazz was relatively brief, but its influence was long lasting. As Waring explains, “the soul jazz movement lasted just over a decade, beginning in the late 50s and fading away at the dawn of the 70s.” I’d take some issue with the latter part of that thesis: as I’ve mentioned before, a viewing of most any of the (for their time) gritty television crime dramas of the 1970s will yield many examples of soul jazz. When Mannix goes into the smoky, seedy club to apply fisticuffs and extract information, the band isn’t playing rock’n’roll; they’re playing a catchy instrumental jazz. Soul jazz.

In any event, as its title suggests, The Birth of Soul Jazz focuses in on the early days of the phenomenon. Bringing together 23 tracks representing the best of the genre from roughly 1958-1962, this set works both as historical overview and incredibly tasty soundtrack for whatever you’re up to.

Perhaps owing to me more reissue-friendly laws existing in the UK, this set collects all of the giants of soul jazz; it’s difficult to imagine an American label being able to get all of the licensing necessary to compile the hits of the era, appearing as they did on major jazz labels like Blue Note, Prestige and Pacific Jazz.

All the big names are indeed here, and represented by some of their best-loved pieces. Art Blakey & the Jazz Messengers‘ seminal 1968 reading of Bobby Timmons‘ “Moanin’” kicks things off, and the quality rarely falters over the next 157 minutes (yes, these are the full versions of these songs, sometimes ten-plus minutes; no cheesy edits here). Blakey’s splashy, flashy drumming gets things moving in style, and then the set goes on to showcase Horace Silver, The Cannonball Adderley Quintet, Hank Mobley, Lou Donaldson, Jimmy Smith, Les McCann, Herbie Hancock, Red Garland, Grant Green, Jimmy McGriff and a host of others.

Some time ago I created a Cannonball Adderley “station” on Pandora for home listening via my Blu-Ray player. I thumbs-downed any vocal tunes, and quickly ended up with a delightful playlist. Les McCann started popping up more and more often, so I made another station based around his style. That playlist quickly introduced me to nearly all of the artists whose work appears on this new The Birth of Soul Jazz set (I knew about Blakey and Jimmy Smith already). That McCann station is now one of my most oft-played selections when I’m at home (which is often). The thing is, The Birth of Soul Jazz is every bit as exciting, varied and enjoyable as that assortment. So for a collection of soul jazz that you can hold in your hand, The Birth of Soul Jazz simply can’t be beat. Essential for fans of the genre, and perhaps the best, most concise musical overview, it’s ideal for turning your friends onto this style of music.

* with apologies to Derek Smalls aka Harry Shearer.