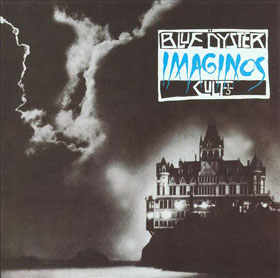 Imaginos has a tortured history. The eleventh studio album released by Blue Öyster Cult (they had by this time released no less than three live albums), Imaginos was comprised of material that had been around for quite some time. Way back in the 1960s when most of the band were together in an outfit called Stalk-Forrest Group, they recorded the original version “Gil Blanco County,” one of the better tunes in this set. And “Astronomy” (yet another Imaginos highlight) first appeared on 1974’s BÖC album Secret Treaties.

But drummer Albert Bouchard – working with BÖC’s sometime producer Sandy Pearlman – had a project of his own gestating in the background for years called Imaginos, and these two aforementioned songs somehow fit into the narrative, a story that is (maybe) about a Zelig-like character who pops up at notable events throughout history. (The Imaginos story line is both thin and impenetrable; just enjoy the music.) In fact Bouchard cut demos of the entire project (plus a couple songs that didn’t make it onto the finished album) sometime in the early-to-mid 1980s.

After toiling as a very successful live act who didn’t do quite as well with album sales, BÖC had hit the big time with 1981’s Fire of Unknown Origin, with its hits “Burnin’ for you” and the much-loved deep cut “Joan Crawford.” But in many ways Fire of Unknown Origin was a last gasp: it was followed by the band’s third live album in seven years (Extraterrestrial Live) and two desultory albums (1983’s The Revolution by Night and 1986’s Club Ninja), both of which found the personnel thinning out. By Club Ninja, only three of the band’s core members remained (vocalist Eric Bloom, bassist Joe Bouchard and Donald “Buck Dharma” Roeser).

So in a let’s-get-the-band-back-together effort worthy of This is Spinal Tap‘s third reel, producer Pearlman and departed drummer Albert Bouchard enlisted the aid of the three remaining members plus returning keyboard player Allen Lanier. But buy the time of the official Imaginos sessions, much of the work had been done. As a result, the credits for the 1988 album read like a who’s who of 80s sessioners: bassist Kenny Aaronson, keyboardist Tommy Zvoncheck, ace guitarist Joe Satriani, and several others. In fact The Doors‘ Robbie Krieger lends lead guitar to two tracks, “Blue Öyster Cult” and “Magna of Illusion.” So in some ways, though Imaginos is presented and positioned as a BÖC album (and sounds like one), in a sense it’s more of a Bouchard solo outing with help from his friends. In fact, the finished tracks – with the exception of the vocals – sound quite a lot like the unreleased demo tape that circulates among collectors (cough, cough). With the exception of some incidental music done for a film soundtrack, Imaginos would be the last BÖC album of new (sic) material for a decade; 1998’s Heaven Forbid features three of the core members, but neither of the Bouchard brothers; neither would return.

Better than its convoluted history might lead you to expect, Imaginos doesn’t have the hooky staying power of the band’s prime-era material, but it’s a worthwhile outing, one that has gone largely unheard in the years since its release. Reaching only #122 on the Billboard charts at the time of its release, the album deserved better. The 2013 reissue of Imaginos on Real Gone Music presents the original album (no bonus tracks) plus a helpful essay by Scott Schinder. Tastes were changing by the late 1980s, and BÖC’s brand of intelligent, hooky, smart-ass metal was (briefly) falling out of commercial favor. But removed from the context of its time and considered on its own musical merits, it’s sure to please those who enjoy the band’s more well-known material.