It’s been about a year since I made the trip to Durham NC to see Greg Lake in concert. In the run-up to that performance, I interviewed Greg, and while in the course of our wide-ranging discussion we spoke a bit about the tour, he wished to keep the details mostly under wraps. I knew it would be a one-man show, but didn’t know how exactly Lake would deliver the songs in this career survey of a show called “Songs of a Lifetime.”

As it happened, the show was a really well-thought-out affair. Lake appeared onstage amidst a “set” peppered with road cases (stenciled “Greg Lake, London”), subdued lighting and a bit of the good old dry ice fog. Alternately seated and standing, he moved between electric guitar, acoustic guitars, bass guitar and even a bit of keyboards. He was backed by recorded versions of his songs, though this was no mere karaoke performance. He sang all his parts, and the recorded backing wasn’t some soulless MIDI playback; these were modern re-recordings of songs from throughout his career.

Some tunes were classics closely associated with Lake: her performed abbreviated versions of King Crimson‘s “In the Court of the Crimson King” and “Epitaph,” plus “21st Century Schizoid Man and “I Talk to the Wind.” Those represented four of the total of five songs on Crim’s debut album, from a time when Lake was their lead singer and bassist. Along with each of the songs, Lake would bookend each with context and personal anecdotes, so that even those unfamiliar with his work outside Emerson, Lake and Palmer could appreciate the songs more fully.

Several ELP songs figured into the set, of course: the romantic ballads “Lend Your Love to Me Tonight” and “C’est Le Vie” plus the hits “From the Beginning,” “Still…You Turn Me On,” “Trilogy,” “Karn Evil 9, 1st Impression Part 2,” and – of course — “Lucky Man.” Sometimes Lake would sit down – usually for the acoustic numbers – but he was a commanding presence when he strapped on his bass and sang the more rock-oriented numbers, too.

Lake took to the keyboard for a reading of “People Get Ready,” and he covered a few other songs that were important to him, songs he’d never previously recorded (or, for that matter, played onstage any time in the last several decades). Elvis‘ “Heartbreak Hotel” and The Beatles‘ “You’ve Got to Hide Your Love Away” (during which he enlisted the audience’s help on the “Hey!” parts) were covered, and for both Lake told interesting stories about those artists.

He even played one left-field original, “Touch and Go,” a song from the period in the 80s when Carl Palmer‘s drum seat was occupied by Cozy Powell. And to the delight and surprise of the audience, he took a fairly lengthy chunk of time to encourage and field questions. True, some of the questions had a Chris-Farley-interviewing-Paul-McCartney quality to them: “Remember the time you played in New York? It was great!” But the whole exchange nevertheless felt very organic, very heartfelt and real. 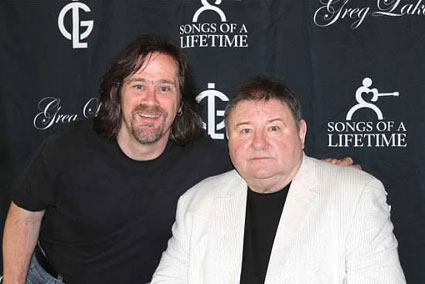 And here’s the most surprising part of all of this: an audio document of that tour titled Songs of a Lifetime accurately captures that vibe. Not just the music, singing and stories (Lake was ably assisted by André Cholmondoley, a master stage manager/factotum and renowned musician in his own right), but the feel of the entire evening. (The Q&A sessions aren’t part of the disc, which is fine.) For me, as a souvenir of the concert tour, Songs of a Lifetime ranks right up there with the photo I had taken of me and Lake, but purely as music it’s a fine listen, too. More song-oriented than your typical ELP album, even with the stories about Ringo Starr, Paris and the King Crimson album art, Songs of a Lifetime is a delightful album, one sure to please anyone who’s enjoyed any phase of Lake’s forty-plus years in the spotlight.