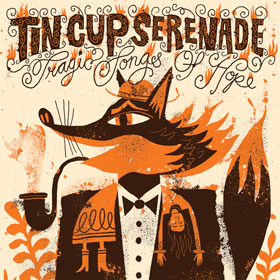 As I’ve chronicled elsewhere, my awakening to the charms of jazz is a relatively recent phenomenon. And as I wade into the deep waters of that genre, I find that certain sub-styles move me more than others. Hard bop, swing, big-band, soul-jazz and some of the more out-there fusion: those are the styles that speak to me, even if I don’t always (ok, almost never) understand what exactly they’re saying.

But other styles of jazz do little for me, and in fact I’ve developed – or maintained — an active dislike for them. For example, the appeal of most jazz vocalists eludes me: so while I can appreciate and honor the vocals of Ella Fitzgerald, Chet Baker and the like, I’d sooner just admit their importance than actually have to listen to them. It’s just me.

That’s also mostly true for Dixieland jazz (or what the British call “trad jazz”). And the sort of jazz that involves straw boaters, garters on the arm and shit-eating grins…well, whatever you call that, it’s my least favorite. There’s a band I’ve seen locally that features a front woman who – this may seem unkind, but it’s inescapably true – looks uncannily like Olive Oyl from the old Popeye cartoons; that band is quite good at what they do, but it simply brings me no joy.

So with all that baggage – hey, I’m a critic, so being opinionated goes with the territory – why on Earth would I set about writing a review of Tragic Songs of Hope, the new 10” vinyl EP by Tin Cup Serenade? Especially when I have a pretty firm policy of not writing negative reviews about relatively unknown artists and/or music?

I’ll tell you why: because it’s very good.

I hadn’t planned to review it. In fact, after a cursory reading of the press kit accompanying the record, I had all but decided it wasn’t for me. But in keeping with another of my policies, I gave it a spin on my turntable: everything sent to me deserves the respect of a listen. Maybe not a beginning-to-end listen, but a fair hearing.

And right after the needle-drop, I found Tragic Songs of Hope intriguing. Unclassifiable, the songs aren’t easily pegged into one style. The titles telegraph some of Tin Cup Serenade’s eclecticism. “Limbo Jazz” certainly has elements of Latin flavor, but not in that bossa-nova way that exploded on the scene in the 50s. No, the band’s primarily acoustic sound is heavy on percussion, folding in some sultry sax and clarinet. The tune is a 1962 Duke Ellington number, with new lyrics penned by Tin Cup Serenade’s leader Rolf Wilkinson. The up-close production style – the record was mostly recorded live-in-the-studio – suits the songs well. “Lament for Javanette” feels like Cab Calloway officiating at a New Orleans street funeral. (It’s another example of Wilkinson putting lyrics to another song from Ellington’s repertoire, in this case a Billy Strayhorn/Barney Bigard number.)

“Sunny Oakland Day” will bring a smile to the most jaded listener (trust me). The song’s extended sax solo from Pete Cornell is a highlight. “Fragments of You” has a subtle calypso/gypsy flavor (yeah, like a lot of TCS’s songs, it’s hard to pin down.)

After those four songs, it’s time to flip the record over. By this point, listeners will have decided whether they like Wilkinson’s mannered vocal style (I do). “Money is King” leans heavily in a Cuban jazz style (rock-oriented listeners, think of Joe Jackson‘s “Cancer” from his 1982 Night and Day for an idea of the texture I’m endeavoring to describe). And in a departure from the other lighthearted or melancholy songs on the disc, this one concerns itself with Wall Street greed, 21st-century style.

“The Ballad of King Tigger” feels like Louis Armstrong, but with jazzy acoustic guitar as the central instrument supporting Wilkinson’s tender vocal.

The pace picks way up for “Here is Love,” one of the few tracks to feature more than one horn (here it’s clarinet and trombone). Eric Garland is still playing his kit with brushes, but it’s in a loose-limbed, spirited manner. It’s my understanding that swing dancers flock to Tin Cup Serenade gigs in the Bay area, and I suspect this brief tune ranks among their favorites.

“Empty Pocket Waltz” is a successful combination of the waltz beat, jazz stylings and a subtle blues feel. And the blues is more overt on “Yaya Blues,” the EP’s closing number.

This is music best enjoyed in subdued light, with a nice glass or three of a full-bodied red wine. But if you can’t arrange those conditions, just play the record in whatever way you can, and enjoy.