The Orange Peels’ Adventures in Modern Recording (and Marketing, and Manufacturing, and…) Part Two

“And,” Clapp summarizes, “That’s what we’ve done ever since. We’re not going to become indebted to a label. If they want to help us out, and they’re offering something of value, we’ll partner with them.” And for the project that would become Sun Moon, the band decided to wade into the new world of crowd funding via Kickstarter.

“We had already gone down the road of deciding that we were going to manufacture our own product,” Clapp recalls. But “At that point the one thing we were really hurting on financially was that we would be fronting the cost of manufacturing. Everything else is, for us, pretty low-cost.” In late 2012, the record was done, and Clapp had designed enough conceptual artwork to work with. So the band decided that they were in “the perfect place to make Kickstarter work for us. We could give people an idea of what we were cookin’ up,” Clapp says, “and if they wanted to, they could help us out.”

Clapp spent a solid week writing the proposal, filming a video and creating other collateral for the Kickstarter program. “I treated it like my job,” he says, “for the month of December.” They initially decided to shoot for a funding goal of $4000, enough to cover a limited vinyl pressing and a first run of CDs. “If we get anything more,” Clapp thought at the time, “this could even help fund our publicity campaign.” Clapp laughs when he observes that “I’m not sure that it was such a great idea to launch right before Christmas. We got a lot of feedback, and reached about half of our goal within about three days. And then it just sat there.” 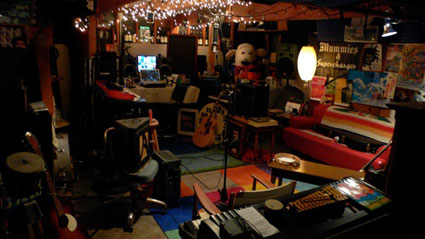 Clapp released some demos online to goose interest in the project, and then the funding “inched up toward the goal, to around 70-80%. And then with two days to go [before the deadline] it went, ‘Boom!’” Clapp believes that Kickstarter fits perfectly with the band’s model of being in business for itself. “We were able to fund something tangible: manufacturing. We were able to say, ‘We’ve done the creative work; we just need some help with this part.’” He stresses that with a Kickstarter program, “You’re either going to succeed publicly, or you’re going to fail publicly.” Clapp is clearly moved by the groundswell of support that Orange Peels fans provided for Sun Moon. “For every stressful day that we sat there thinking, ‘Is this going to work?’, we were rewarded” with fans’ financial support, Clapp says. “We’re so grateful.”

Clapp’s positive experience has convinced him that crowd funding platforms such as Kickstarter do indeed point a way forward for independent artists. “It’s viable for all sorts of artists,” he believes. “It allows you to do what big businesses have always been able to do, which is to guarantee a pre-order level of sales that justifies you spending a certain amount of money up front.” He observes that “there’s no other good way to do that right now” for indie artists other than Kickstarter and programs like it. But he still sees a role in the mix for traditional record labels: “I think there are always going to be record labels. Not all artists are going to want to – or have the expertise – to do everything that it takes. Writing, recording and designing a product is one thing. But as far getting the word out about it, labels that do a good job at that are always going to have a place.” He specifically mentions licensing – a key means for songwriters to make real money – as an area of expertise in which labels like Minty Fresh excel.

Meanwhile, the label that The Orange Peels founded – Mystery Lawn Music – is seeing its own roster grow. There’s overlap between the various and varied acts and projects; some of them are one-off projects, like The Fairwood Singers, while others are ongoing concerns but feature shifting lineups (like The Corner Laughers). But there does exist a unifying aesthetic that connects the various MLM artists. “Everyone who’s involved [with Mystery Lawn] has a need or a want,” Clapp observes, “to form some sort of a musical community in the San Francisco area. This thing seemed to happen on its own, and it seems to work.” In addition to everyone on the roster being “a really talented singer., songwriter and/or instrumentalist, we all happen to get along really well, too.”

“I would have loved for something like [Mystery Lawn] to have existed back in the 90s,” Clapp sums up. “But now that it has come to exist, I’m really happy about that. I’m glad that people who have a like-minded approach to song-based music have a family. We all have a respect for songcraft, and I think, ultimately, that is what draws us all together.”