Home  »  interview • new release • pop   »   The Orange Peels’ Adventures in Modern Recording (and Marketing, and Manufacturing, and…) Part One

The Orange Peels’ Adventures in Modern Recording (and Marketing, and Manufacturing, and…) Part One 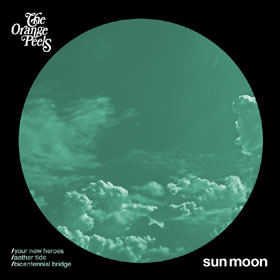 The Orange Peels have been releasing albums for sixteen years; Sun Moon is their fifth album. On all of their earlier albums, the cover art incorporated the color orange. Yet Sun Moon‘s cover art is much more overtly dark-hued. That’s consistent with the subtle change in the music on the new record as well: many of the tunes exhibit less of the sunny, jangly powerpop vibe often associated with the group. “I didn’t do that on purpose,” insists Allen Clapp, the man who – in addition to singing on, playing on and producing the record, designed the sleeve. (“That’s why I learned graphic design,” he chuckles. “I didn’t want someone else designing my album covers!”) Clapp insists he wasn’t aware of the color scheme departure until I pointed it out to him. “Maybe it was subconscious,” he offers. “Maybe it’s indicative of the fact that this music is different, that it’s a little bit more organic.” He laughs when he describes Sun Moon’s cover as having a “primordial slime color. I have no idea why it’s that color; it just seemed to fit.”

Even though there have been some personnel shifts in the band – other than Clapp and wife/bassist Jill Pries Clapp, the lineup has changed with each record, with John Moremen coming, going and returning. Yet there’s a sonic thread connecting the first four records. In some ways, Sun Moon sounds almost like the work of a different band. In fact, in places the record conjures thoughts of – of all things – Led Zeppelin. While the Orange Peels haven’t embarked on a stylistic rollercoaster ride akin to Neil Young‘s incessant genre-jumping, Sun Moon definitely has a darker, more rocking feel. “There are some songs on the second half of 2020 [released in 2009] that sort of hint at this direction,” Clapp observes. “We were already heading there. And then what happened was what happens every time we put out a record.” (“It hasn’t happened this time, yet,” he chuckles.) “Not long afterward, the band disintegrates for some reason. And then Jill and I are like, ‘Great. It happened again. What are we gonna do?’” He goes on to relate the story of how the band set out on tour to support 2020, starting “with one band, and coming home with another: the band we have now.” By the end of that tour, Clapp says, “it was obvious to us that the band was already sounding different.” So those changes influenced the sound of the subsequent studio recordings that became Sun Moon.

The first piece the new lineup recorded was “Traveling West/Sundowns,” an instrumental track Clapp characterizes as a “weird little TV theme song kind of thing. We got together, put up some microphones, and came up with it.” Subsequent sessions were very open-ended: “We got together with nothing in mind as to what we were going to do,” says Clapp. That itself marked a fundamental shift in the way The Orange Peels approached album sessions. “As one of the main songwriters in the band,” Clapp explains, “I typically come to the band and say, ‘Hey, I’ve got these songs.’ This time, there was a lot less of that; it was more along the lines of, ‘Hey, let’s just show up and see what we come up with.’” The resulting work is “just what the band sounds like, really,” he says. The music on Sun Moon is more collaborative in nature, in both the songs and arrangements, than what came before. “I guess I felt comfortable enough with this lineup, that I had no problem ‘giving that away,’” Clapp muses. 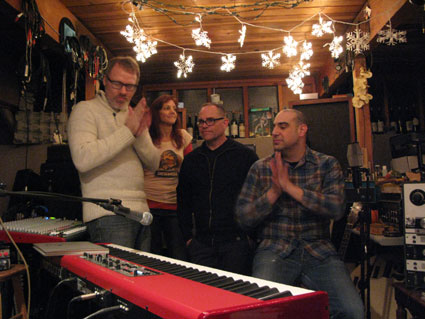 The Orange Peels have released albums on Minty Fresh, Spin Art, Parasol, and then – starting with 2020 – their own Mystery Lawn (distributed by Minty Fresh). “When we put our our first record [1997’s Square], the indie music world was still fairly similar to the major label world,” Clapp recalls. “There was just less money involved. The label gave us a chunk of money and said, ‘Go into the studio and record your album.’ We were in our twenties; it was the kind of thing you dream about.”

But the label was, Clapp explains, “like a bank. They fronted that money, hoping for a return on their investment. We were getting charged for all that stuff – posters etc. – and it felt like we were getting it for free. But,” he laughs, “we weren’t.”

“On our second album [So Far, from 2001], SpinArt gave us less money; you could already see that the industry was changing.” He observes that “independent labels had less money to spend, and they were expecting more form the artists; they wanted us to do more stuff on our own.” So the rules had changed, but not always for the worse: “They were offering us a better royalty rate,” Clapp notes. Overall, he says, it was more of a collaborative endeavor, with an equitable splitting of profits (if any). “And,” he says, “It worked out pretty good.” Subsequent distribution on a Japanese label yielded more financial rewards for the band, who were, as Clapp characterizes it, gradually “becoming our own business.” 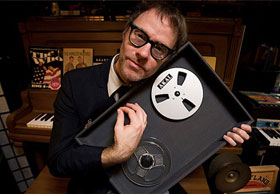 Their experience with Parasol Records for 2005’s Circling the Sun was “basically a carbon copy of that arrangement,” Clapp explains. The album got separate licensing agreement in Japan and Europe, and the band booked their own tours. “Finally,” Clapp says, “I realized, ‘I can’t really see what a record label is doing for us any more.’ We were doing so much of this stuff on our own; the workload had really shifted from the label people doing everything to the band doing everything.” The Orange Peels decided that since they already had their own recording studio (“I had been building up my recording arsenal along the way,” says Clapp), they decided, “let’s just do this whole thing on our own, and call it Mystery Lawn Music.” They would partner with companies for distribution as needed, but they would be truly on their own. The resulting arrangement would be lower risk for the distributor (since the band had a finished product ready to deliver) and the band (since their work was already done). Clapp happily describes Minty Fresh’s role in the process as “curator.”