I started attending arena-scale rock concerts back in the late 1970s. My first show was in October 1978, seeing Electric Light Orchestra with their hamburger bun/spaceship setup at Atlanta’s Omni. (In the words of Rob Reiner‘s Marty DiBergi character in This is Spinal Tap, “Don’t look for it; it’s not there anymore.) One of the things I remember from the shows of that era was the fact that the opening acts had it pretty rough. They often played to still-nearly-empty rooms, with the house lights still burning brightly, and the sound techs were generally even more indifferent to their music than the audience was. Worse yet, the biggest applause the opener would generally get was in response to, “Okay, this will be our last song…”

From my perspective, things have changed. Part of that has to do with time and general attitudes, I think. It’s also true that for the most part the arena-show era has come and gone. While some acts still play the big stadiums and draw massive crowds, in the rock idiom, smaller clubs are the preferred venue. That’s certainly true for me, living in the small city of Asheville NC. While we do have a civic center where big name artists can come to relive the terrible-acoustics vibe of 70s concerts (Bob Dylan will be here in a few days), mot of the quality acts play here at The Thomas Wolfe Auditorium, The Grey Eagle or The Orange Peel.

And the audiences at those venues – in my experience, at least – are far more receptive to opening acts than was the case in my Atlanta days.

Certainly it helps that headliners today seem to give some actual thought to billing opening acts who have some sort of aesthetic compatibility; long gone are the days when the record company (“What’s a record company, Daddy?”) would foist a labelmate of dubious quality upon the touring headliner.

A prime example of intelligent billing was the recent Black Angels show at The Orange Peel. The Austin-based group has made a name for itself with droney-yet-catchy modern psych. Their tribal beats (in other words, not a lot of cymbals) and minor-key arrangements conjure the vibe of late-late 60s psychedelia; their sound might well be described as the aural equivalent of a good “bad trip.” I like ’em, and have seen and interviewed them before. Their show was predictably impressive, and the packed house loved it. The accompanying visuals were especially effective, a sort of modern rethink of the kind of thing Andy Warhol‘s Exploding Plastic inevitable tried to achieve.

Not to take anything away from The Black Angels, but where things got really interesting was earlier in the evening. Two bands took the stage before them, and both offered their own spin on selected sounds of the Sixties. 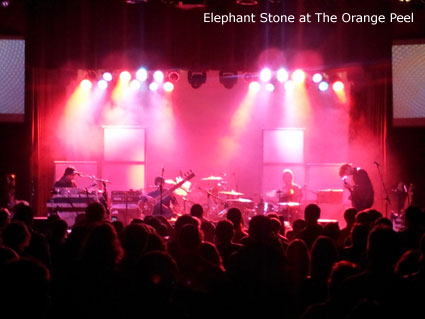 Elephant Stone took the stage first. The Montreal-based quartet wove a thrillingly authentic sixties vibe, and in fact upped the ante beyond how they actually did it back then. Starting with catchy tunes (always a good idea) and clear, gentle vocals that were mixed nice’n’out-front, the rocking band added something one rarely if ever sees in the rock idiom: sitar. No, not a Coral electric sitar, but the real, honest-to-goodness, crosslegged-on-the-floor, Ravi Shankar instrument. With a shimmering, jangling sound heavy on tambourine-shaking vibe, Elephant Stone brought the house down. And while Asheville audiences – perhaps because they often disproportionately represent creative types – are usually appreciative of opening acts, the enthusiasm with which the packed house greeted Elephant Stone was extraordinary. And well-deserved. The band easily rates a top spot billing when (hopefully) they return to Asheville.

The Allah-Las tread similar musical territory, but they too have style all their own. While not employing the exotic instrumentation of Elephant Stone, they piloted their wayback machine straight to mid 60s Los Angeles; their songs as presented onstage gave modern-day listeners the most authentic recreation of what it must have been like to see bands like Love at legendary venues such as Pandora’s Box and the Whisky-a-Go-Go. Delightfully unconcerned with updating the 60s garage/psych/punk aesthetic for the 21st century, The Allah-Las played a set of songs that not only sounded like they were written in 1966, but played then too. No small feat: While their album gets the production vibe just right, it’s not reasonable to expect that the band could realistically reproduce that feel onstage. But in fact they did: jangling guitars were the order of the night. 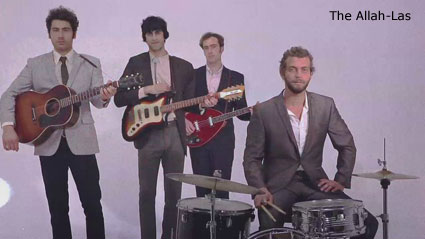 Whether a concertgoer showed up at The Orange Peel to see and hear The Black Angels, The Allah-Las or Elephant Stone, odds are high that they came away happy at witnessing all three. With complimentary sounds and musical approaches yet distinct identities, all three bands put on excellent shows. In the end, the evening felt more like a triple-bill than a headliner with two openers. It was one of the best local shows in recent memory.