Home  »  rawk • reissue • review   »   Album Review: Cat Mother and the All Night Newsboys — The Street Giveth…and the Street Taketh Away

Album Review: Cat Mother and the All Night Newsboys — The Street Giveth…and the Street Taketh Away 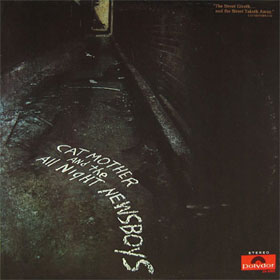 When it comes to James Marshall Hendrix, there are any number of “fun facts,” little tidbits of trivia that may or may not add to one’s understanding of the man and his music. For example: before he became famous, he played the chitlin’ circuit. He was part of the early 60s r&b/rock scene in the Pacific Northwest. At the urging of Micky Dolenz, he opened for The Monkees on one of their concert tours. He played guitar on a Timothy Leary album, with a pick-up band that also included Stephen Stills.

Perhaps lesser known than any of those morsels is the fact that he produced an album for another act. Now, don’t get your hopes up too much: despite the fact that – as many critics have observed – Hendrix was one of the prime exponents of studio-as-instrument, his work on The Street Giveth…and the Street Taketh Away by Cat Mother and the All Night Newsboys bears little if any of Hendrix’ sonic fingerprints.

In fact there’s nothing Hendrixian about this album at all. But that should not be taken to mean that it’s not a fun ride. The band’s “Good Old Rock’n’Roll” was deservedly a hit in 1969. The song is little more than a spirited medley of early rock’n’roll chestnuts (“Blue Suede Shoes,” “Chantilly Lace,” and four others) strung together with a brief chorus about, well, good old rock’n’roll. Such was the vogue at the tail-end of the 60s, when many heavy rock music purveyors had briefly grown weary of the heavy sounds of the psychedelic era. (The Beatles‘ Get Back project, resulting in the Let it Be album, is perhaps the most well-known back-to-basics example of the era, but music from Dylan, The Rolling Stones, The Band and many others also followed that aesthetic.)

But as luck would have it, the rest of the Cat Mother album is even more interesting. “Favors” features some memorable vocal harmony work on the chorus, a driving funky beat, and stinging lead guitar work. With its Procol Harum-like organ work (and some lovely fiddle work), “Charlie’s Waltz” sounds like the work of a different band yet again. It would be an overstatement to compare Cat Mother’s approach here to The Turtles‘ classic Battle of the Bands, but the band’s versatility is on full display on The Street Giveth…

The stylistic variance continues on “How I Spent My Summer.” Here the band sounds a bit like Peanut Butter Conspiracy crossed with The Five Man Electrical Band. Accessible, tuneful and catchy, the track balances hooky riffs with a strong rock sensibility.

The sound of a scratchy record has been used to great effect by many acts, from Moby Grape (Wow‘s “Just Like Gene Autry: A Foxtrot”) to Matthew Sweet (Girlfriend), and Cat Mother got in on the game too with “Marie,” in which they evoke memories of Sopwith Camel crossed with (believe it or not) The Grateful Dead.

Some manic tack piano work forms the basis of “Probably Won’t,” a number evocative of Northern California acts such as The Charlatans. The song’s la-la-las and cha-cha vocalisms make it a spirited singalong (and the lyrics implore listeners to do just such a thing).

The slower funky-tunk approach of “Can You Dance to It?” features some appealing Wurlitzer electric piano and cowbell, sounding very much like the country-influenced rock that Moby Grape was putting out. The gentle “Bramble” sounds like the Dead with an actual singer; melancholy violin work adds some texture.

“Bad News” is dramatic and dynamic; with its Vanilla Fudge-like descending riff, it’s one of the record’s strongest tracks. A lengthy violin solo on the outro is a highlight. “Boston Burglar” combines a jugband vibe with wah-wah pedals; the effect is odd but appealing.

The record closes with a lengthy, winning organ-centric instrumental, “Track in ‘A’ (Nebraska Nights)” and it’s perhaps the most musically diverse tune on the entire record. In places it sounds a bit like The Allman Brothers. One can only think that this big finish would have left listeners of the day anxious for the follow-up record.

“Good Old Rock’n’Roll” did make the Top 40, and the album rose to #55 on the Billboard charts, but the album eventually disappeared from record shelves, and three follow-up albums for Polydor failed to match the debut’s modest chart action. Original copies can be found online, but the 2013 CD reissue from Real Gone Music will suffice for most listeners; John Platt‘s liner notes (in which he calls The Street Giveth…and the Street Taketh Away a “minor classic of the era”) give curious listeners a bit more background on this relatively unknown band. The Hendrix connection here is nothing more than trivia, but the album is successful on its own merits, Jimi or no. Ignore reviews that insist The Street Giveth… is noteworthy only for its producer. Recommended.