Not long ago, a female friend – friend, I say – and I got into a conversation about the runaway bestseller Fifty Shades of Grey by E. L. James. Being a guy, I had only heard a little bit about the book; I knew it was very popular among a demographic one might describe as “bored housewives” (do those exist?) but the few women I knew who had read it described it as a poorly written book; one friend told me she put it down fifty pages in because it was so weak. 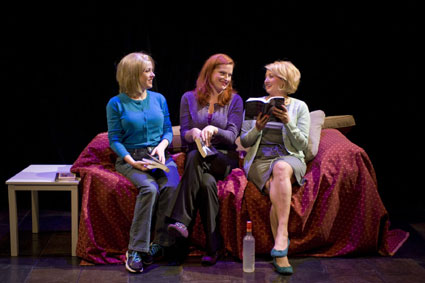 But my friend and I were a bit intrigued; after all, it has sold a gazillion copies – somebody’s reading it – and spawned a couple sequels. I hear there’s a movie in the planning stages, too. At some point during our discussion, she suggested that it might be amusing to read it aloud. So the next time we got together, we spent an evening with me cooking dinner, and her sitting at the bar – cocktail in one hand, trashy novel in the other — reading the book to me.

It was an hysterical experience. We were both laughing so hard; she attempted to voice the characters: the innocent first-person narrator nymphet and the intimidating, head-cocking, long-fingered titular character. My friend could barely contain her laughter; I didn’t even try. We both howled as this trainwreck of a book unfolded. About a half hour in, we both lost count of the number of times the hacktackular “author” described Grey’s long fingers, or noted that he (ahem) cocked his head.

All I could think – between peals of uncontrollable laughter – was, “Who reads this shit?” It’s perhaps best described as “a book for people who don’t read books.” I think I lost more brain cells having Fifty Shades read to me than I did my entire junior year in college.

The narrating character Ana is clearly meant to be portrayed – at least initially – as a naïf; but if E.L. James’ wring style is any indication, she’s none too experienced – in writing, I mean – either. Fifty Shades of Grey may be the most horribly written piece of junk I’ve ever had the occasion to read. It’s laughably bad, and James seems never to have been within a hundred yards of a thesaurus.

Now, there’s bad-bad, and there’s good-bad. Fifty Shades is good-bad, the literary equivalent of Ed Wood‘s classic Plan 9 From Outer Space, quite possibly the worst film ever committed to celluloid. (And a must-see.)

So – some weeks after our little book-reading – it was with great amusement that I discovered that a production company was mounting a stage parody of the book. Not just any parody, mind you: it’s a musical! From the press kit for 50 Shades! The Musical comes this grin-inducing teaser:

I wasted little time in contacting the show’s publicists, and I am pleased almost beyond description to tell you that I will be headed to Knoxville TN this Saturday to see the show (with my reading partner, of course). The show will be at Knoxville’s historic Bijou, with a matinee at 6pm and a late show at 9pm. Tickets are available here. Look for my review soon on these pages.