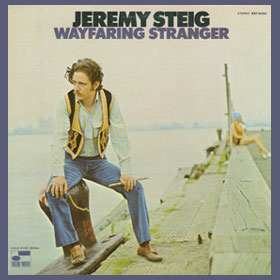 In the very late 1970s – or perhaps it was the very early 80s; after so many years, I’m not entirely sure – I picked up a used copy of Lillian Roxon’s Rock Encyclopedia. I was (and remain) a voracious consumer of that kind of thing; not long after I became a rock fan, I became a fan of rock journalism. Roxon’s 1969 book was one of the first long-form serious treatments of rock music, and while it’s quite dated now, it remains an absolutely fascinating read. (Ed Naha‘s mid 70s update of the late Lillian Roxon‘s work is a disaster to be avoided, except in a compare-and-contrast sort of way.)

Roxon made a point to include a number of bubbling-under artists, including several whom (at the time of the book’s first printing) hadn’t even released albums. Thus readers can learn about a new group “out of Detroit” (sic) called The Psychedelic Stooges. Another group that merits mention is a jazz-rock outfit (the hybrid was quite new and novel at the time) called Jeremy Steig and the Satyrs. Their sole album (a self-titled LP released in March 1968) is, in Roxon’s estimation, jazz aimed at a rock audience. Predictably, it didn’t shift major units and is largely forgotten (despite a small-label CD reissue in 2009). But Steig himself was then a fairly highly regarded jazz flautist, and he remains musically active today, now based in Japan.

A couple of years after the Satyrs LP, Steig released an album called Wayfaring Stranger (named after the traditional folk classic). As the liner notes in the album’s new reissue (on the estimable Real Gone Music label) explain, in those days Steig “was signed to a manager who tended to trade him around to record companies like a major league ball player,” and as a result he ended up on Blue Note for the 1970 album.

Steig’s band is small and configured in a traditionally jazz-styled manner. Bassist Eddie Gomez was already quite well known as Scott LaFaro‘s replacement in The Bill Evans Trio, and Don Alias (drums) and guitarist Sam Brown were highly regarded in the jazz world as well, both with extensive pedigrees.

“In the Beginning” is a spare piece in which Steig’s flute carries the tune, with subtle yet funky support from Gomez and Alias (if Brown is on the track at all, his contributions are minor). Toward the song’s fadeout, some vocalizing a la Ian Anderson works its way into Steig’s attack, though Pat Thomas‘ liner essay asserts that the then-new Jethro Tull wasn’t an influence upon Steig’s playing. Of course others (notably Rashaan Roland Kirk) used similar breath techniques.

In some ways the vibe created within “In the Beginning” is continued in “Mint Tea.” While the band hits a bit harder – and Steig’s playing becomes more forceful – the tracks continues unfolding in a catchy/funky manner, but not one that will find listeners with a hook-laden melody stuck in their heads thereafter.

Sam Brown’s electric guitar makes its first audible appearance on the title track, easily the most melodic and accessible of the record’s six tracks (it’s perhaps worth noting that the other five are either Stieg compositions or co-writes with Gomez). In the tried-and-true jazz tradition, Steig states the melody, and then restates it in mutated fashion, then more so, then he’s joined by countermelodic work from his cohorts. The track goes on some eleven minutes, but never fails to sustain interest; each player takes his turn to shine, albeit in a muted fashion. It would be a disservice to characterize this music as background music, but in a pinch it could serve that function quite well.

Things take a welcome turn toward the funky with “Waves,” in which Gomez’s upright bass takes a more prominent role; the counterpoint between his assertive yet subtle acoustic playing and Steig’s breathy, precise flute work is a highlight of the record; Alias’ drumming – with plenty of subtle snare and cymbal work — makes it even better.

The lengthy “All is One” builds from a spare Steig solo showcase into something punctuated by Gomez’s moody bass plucking. Five-plus minutes in, Steig adopts a more fluid, lyrical style, while Gomez plucks way ominously (Brown and Alias are wholly absent on this track). Eight minutes or so along, Steig blows what might most accurately be called psychedelic flute.

Wayfaring Stranger wraps up with “Space” (as with most Real Gone Music reissues of forgotten/lost treasures, there are no bonus tracks on the CD reissue). Gomez takes up the bow and plays his bass like a cello, playing higher on the neck, well up into the treble range. The result is a lovely (if melancholy) duet between the bassist and Steig. The musical dialogue between the to truly feels like a conversation, and is perhaps the most evocative piece on the album. (Evocative of what, you can decide.) Toward its end, “Space” gets truly weird in an avant-garde kind of way, perhaps presaging Steig’s work with Yoko Ono a mere year later, on her Fly LP.