I read a description of these guys that likened their music to house (EDM). And though I can’t find the citation, I’m pretty sure somebody else labeled Moon Hooch as a dubstep act. Now, I pride myself on having pretty wide and eclectic tastes, but mention EDM or dubstep and I reach for my (metaphorical) revolver. I just don’t dig the mindless whomp.

To my ears, Moon Hooch is neither of those things, thank goodness. An hour or so spent with their self-titled (and self-released) album showed me that there’s a surprising lot that can be done with two saxophones and a drum kit. At least in the hands of expressive, expert, effusive musicians like these. And while the album is quite good, onstage the trio took things to another level entirely. 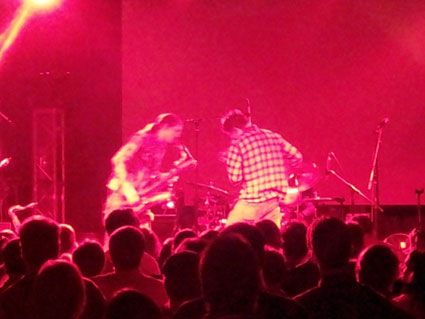 Mike Wilbur mostly plays the songs’ lead parts on tenor sax, though he occasionally switches to slide whistle, harmonica or treated vocals (sometimes all in one song). Wenzl McGowen‘s role is a bit more difficult to describe, and truly has to be seen and heard to be fully appreciated. He too plays tenor sax sometimes, but more often takes lower notes on baritone saxophone, and something he calls “bazookahorn.” For one number, he inserts a long tube into the end of his horn (bamboo? Plumbing pipe? I couldn’t tell from my vantage point) and the resulting sound is a guttural buzz vaguely reminiscent of a (very melodious) foghorn. Or…a Minimoog. Combined with Wilbur’s high end, the thunderous bottom end McGowen brings yields an overall sonic attack that seems to cover the entire audible range.

Their instruments aren’t highly-polished; no, in fact their horns looks as if they were rescued from a shipwreck at the bottom of the sea; one wouldn’t be surprised to see a chunk of seaweed blow out the end of one of the dull gray-patina horns. Somehow this only adds to the mystique.

The interplay between the two – sometimes unison, sometimes harmonic, sometimes an atonal, angular skronk – is thrilling, and the manner in which they move about the stage helps put a visual accent onto their very musical approach. Struggling to find a way to label their style – it sure as hell ain’t dubstep – I found myself thinking, you know, this really is jazz.

But here’s where things get delightfully complicated: James Muschler sits behind his drum kit, bashing out beats that hold everything together. A Powerful percussionist, Muschler adds tone color of a sort to Moon Hooch’s songs, and what/how he chooses to play sends the band’s original, instrumental compositions off in whatever direction he decides. What this means in practical terms is that Muschler could lay down a beat that pulls the jazzy sax interplay decidedly toward funk, disco, punk, metal, soul, or rock. Sometimes the result is ass-shaking disco; other times it’s trippy downtempo. And yet other times it is thunderous post-rock/fusion/progressive rock of a sort. 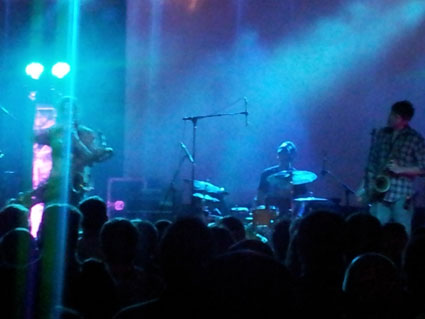 All of this only hints at the dizzying versatility of Moon Hooch. Right out of the gate they earn points for doing something unique; the fact that they do it with style makes them even better. It may be difficult to imagine a world in which a two-saxes-and-drummer instrumental trio ever headlines a major tour, but these guys delivered at Asheville’s Orange Peel, and were rewarded with ecstatic applause from the full house there to see headliners They Might Be Giants. The trio clearly appreciated the enthusiastic response; they seemed almost a bit emotionally overwhelmed by it all. Props to TMBG for adding Moon Hooch to their tour; their audiences get a real treat, and it’s a testament to how assured and confident TMBG are of their own quality. Because plenty of bands would shudder at the prospect of following Moon Hooch onto the stage. If you’re ever presented with the opportunity to see this tough-to-label trio, don’t miss them.
Tags:moon hooch