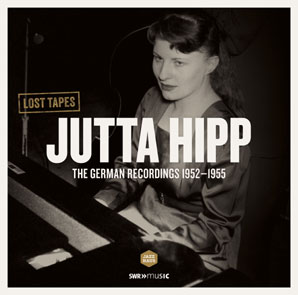 Had the life and career of Jutta Hipp not happened, pop culture might have had to fabricate them. Hers is such a unique, compelling, mystifying and ultimately frustrating story that it begs for a Hollywood treatment (one wonders why this hasn’t happened). In the 1950s, there were precious few female jazz pianists. Even fewer of them were from Germany, of all places. But Jutta Hipp fit those descriptions, and seemed ready-made for success: not only could she play, but the red-haired beauty was quite nice to look at as well.

Her recorded output, however, was quite slim: four albums on Blue Note, all released within the space of less than two years, plus the A-side of a 1955 album on MGM. Shortly thereafter (as in, within a year) she emigrated to New York City, and by 1958 she had left music altogether, and effectively disappeared from the music world, never to return. She died in 2003.

Yet Jazzhaus – the new label curating rare jazz recordings made in Germany – has found an album’s worth of unreleased material, and some of it predates her Blue Note work by as much as three years. Variously recorded live and in the studio, the three sessions on The German Recordings 1952-1955 easily earn Jazzhaus’ “Lost Tapes” designation.

The November 1952 tracks are a performance in front a live audience. Hipp’s effectively-solo “Blues After Hours” (the rhythm section is nearly inaudible) finds her sounding quite stiff: while she plays well – her right hand work is as dexterous as her left-hand is steady and solid – her performance is overly-mannered, as if she’s terrified at playing in front of the crowd. As her band mates come in, she seems to loosen up a bit; by the end of the track, she has audibly warmed up. The difference in delivery on “Erroll’s Bounce” is staggering: with the band providing more audible support, Hipp lets loose, and the sprightly emotion pours forth as the band swings. As the remaining tracks unfold, Hans Koller adds his tenor sax to the mix, and the performances lean toward smooth and romantic (“You Go to My Head”) and contemplative (a reading of Cole Porter‘s “What is This Thing Called Love”). Overall the audio fidelity is passable for a live date, and its rarity makes it essential.

Side Two (this album is not available on CD, instead only on 180-gram vinyl plus an MP3 download card) features a pair of studio dates. The first dates from six months after the Jazztime performance, and is the artifact of a shellac recording made for the Brunswick label. Those two numbers – an Albert Mangelsdorff original called “Sound-Koller” and “Come Back to Sorrento” showcase a much more self-assured Hipp and much improved production and fidelity. Hipp displays subtlety, poise and inventiveness here, and shares the spotlight with her band (including Mangelsdorff on trombone).

Two years later Hipp was back in the studio to cut four more numbers; the upgrade in audio quality here is stunning, and finally worthy of the 180-gram treatment Jazzhaus gives it on this new release. With a band that now includes the lyrical interplay between guitarist Attila Zoller (her then-fiancee, though they never married), Mangelsdorff and Joki Freund on sax, Hipp truly comes into her own; these tracks, especially “Daily Double” sound little like her work of a mere thirty months earlier. Hipp’s playing is at once assured and lyrical; her commanding right-hand work on “Indian Summer” is a delight. She takes it soft and sensitive on “Everything Happens to Me,” during which she carries the melody on piano through the entire song. Her final recording in Germany – she abruptly left for New York mere weeks after this date, never to return – is a spirited reading of Freund’s “Serpentine,” during which each player takes his/her turn in the spotlight.

Up to now, Jutta Hipp’s entire recorded output totaled four and half LPs worth of material; with this new release – likely clearing the unreleased archives for good – an important addition to both her catalog and that of jazz in general has been made.