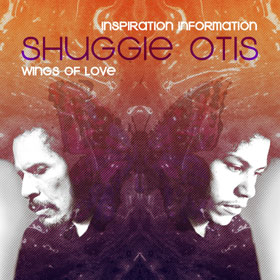 There are many stories in pop music history centering around artists who – for one reason or another — never quite fulfilled their potential. More often than not, those reasons tend to fall into one (or both) of two categories: substance or psychological issues, and/or management that was bad, inept or (at worst) malevolent.

Whatever the particular reason or reasons, Shuggie Otis‘ career stopped in its tracks when he was barely 20. Son of the legendary Johnny Otis – the Greek-American r&b bandleader who often “passed for black” – Shuggie began his career as a young teen, playing guitar in his dad’s band. And young Shuggie was a dizzyingly impressive talent; not only could he spin tasty leads on his electric guitar, but he applied his inventiveness equally between covers – adding new interest to old songs – and his own original material. He also played a wide variety of instruments and sang. His 1970 solo debut Here Comes Shuggie Otis is an overlooked gem, and its opener “Oxford Grey” is an exemplar of Otis’ synthesis of styles.

The man born Johnny Alexander Veliotes, Jr. released a mere three albums in his brief career: after the debut there was the highly-regarded Freedom Flight in 1971, a record that contained his most well-known song, “Strawberry Letter #23” (later a hit for The Brothers Johnson), and then – after a longish break – 1974’s Inspiration Information. But after 1974, no new music has been released by Shuggie Otis. Until now.

In 2013 Epic/Legacy is reissuing Otis’ third and final album, along with an additional disc of material called Wings of Love. This bonus disc contains music that Otis has been working on – true solo material – over the last thirty-nine years.

Inspiration Information
The reissued Inspiration Information is a flawed treasure. While not quite up to the standard of his first two records, it features many ace tracks. The title song (and album opener) sounds very much like Hall & Oates (though of course it’s the other way around). The smooth-yet-funky sounds of “Island Letter” are a treat, and “Sparkle City” sounds like a way-funkier Steely Dan.

On the tantalizingly brief “Happy House,” Otis aims successfully for a sort of r&b answer to Todd Rundgren‘s one man band excursions. And he shows off his ability to mimic other guitarists throughout the record: “Rainy Day” has a Wes Montgomery feel. But while Otis’ interest in (and reliance upon) the Rhythm King – an early drum machine – might have been fascinating on record in the mid 1970s, today it gives the songs a frustratingly unfinished demo-like quality. Even when juxtaposed with soaring string arrangements (as on “Aht Uh Mi Hed”), the clip-clop drum machine sounds detract from the overall quality of the songs. With its lounge organ and effects-laden guitar licks, “XL-30” sounds like a good idea for a song, but it never develops fully into one. Even though “Pling!” has some sultry sax work, the drum machine keeps it from being effective. But the varied “Not Available” wraps the album up in style; when Otis has real drums, the quality of his material seems to rise dramatically.

The bonus track “Miss Pretty” is a funky track that wouldn’t have been out of pace in a blaxploitation film. Another bonus, “Things We Like to Do” is a rarity: an Otis track with drum machine that actually works. The hypnotic percussion blends nicely with some extremely tasty woodwind work and stacked vocals. “Castle Top Jam” feels kinda funky but doesn’t really go anywhere. As a whole, Inspiration Information is a slightly frustrating mix of soaring highs and disappointing lows, but well worth hearing.

Wings of Love
The bonus Wings of Love disc attempts to answer the where’s-Shuggie-been question. And the answer is: somewhere a bit odd, somewhere out of time. “Special” is layered with strange vocal overdubs that upset the flow of the song, and an odd riff that also doesn’t seem to fit: there’s polyrhythm and then there’s this. Fans of Prince might enjoy it, though. The staked guitar leads of “Give Me something Good” are catchy, but in terms of style, the slightly discofied track seems pinned to, say, 1977. The Rhythm King returns on “Tryin’ to Get Close to You,” which is otherwise an effective track featuring some funk-poppin’ bass lines.

“Walkin’ Down the Country” sports a higher level of production values, and finds Otis in a smooth, romantic mood. It’s among the strongest cuts on Wings of Love, and shows that Otis has improved as a singer as he’s grown older. Sprightly horn chart s are juxtaposed with frenetic Rhythm King backing on “Doin’ What’s Right.” With real drums this could have been a contender.

“Give Me a Chance” and “Don’t You Run Away” sound like a commercial bid circa 1980, with dated synth and guitar sounds. In that context, neither is too bad, but the cuts are not especially memorable. Despite its nth-generation tape dub feel, “Fireball of Love” showcases Shuggie’s guitar work in a funk-shuffle context, with a nice organ bed.

“Fawn” sports a n appealing melody,but could have been done by any number of slick, identikit 80s r&b acts. “If You’d Be Mine” is bogged down with dated synth sounds. But then things change drastically: “Black Belt Sheriff” features Shuggie Otis live onstage with an acoustic guitar; it’s evocative and reminiscent of another long-lost artist, Sixto Rodriguez. The set ends with a commercial-sounding (if highly derivative) number called “Destination You!” Yet again, the cheesy percussion detracts.

Wings of Love would easily qualify as a three-star album had it immediately followed Inspiration Information; as it is, it’s a document of an artist with plenty left to say, but who (as heard on this disc) is saying it using outdated forms. One can hope that its success will lead to new material from Shuggie Otis (currently mounting a tour), and that he’ll get ahold of a real drummer and some modern keyboards to back him up.