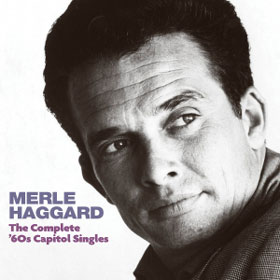 First it was Collectors’ Choice Music, and then when they shuttered their label, it was Real Gone Music. Now Omnivore – another boutique label run (in the best way) by crate-digging types – is following suit and putting together complete collections of a- and b-sides of 45rpm singles form an array of important artists. And while I rarely cover c&w, The Complete ’60s Capitol Singles by Merle Haggard is worthy of attention.

The #42 hit (on the country charts) “I’m Gonna Break Every Heart I Can” is classic country in every sense of the word, but it’s informed by an unmistakeable pop sensibility. It’s not cry-in-your-beer corny stuff; instead it’s got a sly humor that resulted in a sort of pop-country that appealed to the likes of The Beatles. Modern fans of artists like Junior Brown will find plenty to like in these sides, even if their tastes don’t normally extend to country and western sounds.

The production values are state-of-the-art, owing in part to the fact that – though these are all c&w tunes — they were recorded at Capitol’s Hollywood studios. As a result, the personnel (the CD provides excellent discographical and session data; Omnivore knows its audience) includes such esteemed and in-demand players as Glen Campbell, Jim Gordon, and James Burton. The tracks are polished without being slick, heartfelt without being cornpone.

Amusingly, the Haggard original “I Take a Lot of Pride in What I Am” sounds an awful lot like Glen Campbell’s “Gentle On My Mind,” a massive hit song released a year earlier; perhaps unsurprisingly, Campbell’s not on this track. One thinks if he had been, he might’ve said, “Uh, Merle?”

The b-sides are surprisingly strong, considering that the flip side of singles was long home for perfunctory, throwaway tracks. Haggard’s b-sides tend more toward conventional c&w weepers, but even these are treated with care and finesse. For example, “This Loneliness is Eating Me Alive” (the b-side of the #2 hit “I Threw Away the Rose”) features some tasty guitar licks throughout,courtesy of either Burton or Campbell; the song sounds like a hit.

The twenty-eight tracks on Haggard’s The Complete ’60s Capitol Singles were all cut within the mere time frame of five years, predating his later “outlaw” phase (though some of the song lyrics foreshadow that phase; see “Branded Man” and “Sing Me Back Home, both from the Summer of Love). The big hits are here: “Mama Tried (#1), “Okie From Muskogee (#1, and #41 pop), but the lesser-known tracks hold up nearly as well. A timeless collection that won’t curl the toes of non-c&w fans, this is an excellent entry point into Haggard’s 1960s output.