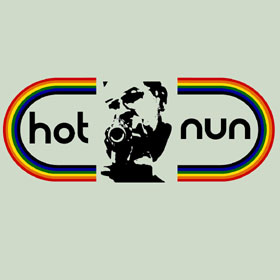 When the self-titled CD from Hot Nun arrived in my mailbox recently, it seemed oddly familiar to me. I couldn’t quite put my finger on it, but the package’s graphic design was reminiscent – not in actual look, but rather in style – of something else in my collection. When I opened up the gatefold sleeve, I noticed the name Jeff Shelton listed as producer, sole songwriter, and band member (vocals, guitar, bass, synth). Aha, I thought, I remember him from The Well Wishers, the band who created one of powerpop’s better releases in recent memory.

Then the I put on the CD, and the similarities continued. Hot Nun is a hard-edged outfit, leaning more on the Redd Kross / Material Issue / Cheap Trick school of rockin’ out than The Well Wishers (essentially Shelton solo) did. Guitars are set on “stun” (or with the distortion turned up nice), power chords abound, and the bass often plays in lockstep with the rhythm guitar as they chug through some heavy riffage. You get the rock tropes – handclaps, drummer insistently hitting the bell of his ride cymbal on the middle eight – but it’s all done in a fresh manner, never seeming slavishly retro.

Well, not slavishly, but there’s definitely a pleasing whiff of retro here. “Spirit of 76” (not the Redd Kross tune) is an ode to, well, you know. Its paeans to radio, and a time when listening to music was often more of a communal than solitary experience – are a clear nod in the direction of a past that’s sadly gone. “Who Do You Love” (not the Bo Diddley rock’n’roll chestnut) chugs along nicely, and some clever shifting of dynamics makes the song catchy and memorable.

“Queen Bitch” (not a similarly-named cover but the actual David Bowie song) trades Bowie’s acoustic approach for a harder-rocking arrangement that’s probably closer to how the Spiders From Mars played it live, right down to Shelton’s faux-British vocalizing. Screeching tires signal the careening “Who Do You Think You re?” the album’s most manic number. It’s as if the trio decided, “let’s combine all the elements we’ve used on the previous seven tunes, and then play twice as hard and fast.” It’s a delightful way to end this short album, leaving the listener breathless. And, I should add, ready for more.