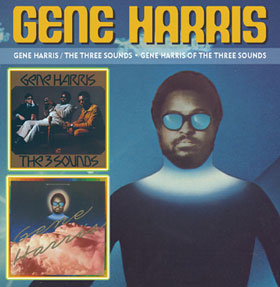 The venerable Blue Note label has long been a trademark of quality; even if you’re not familiar with the artist or the recorded work, chances are that if it came out on Blue Note, it’s at least worth checking out. And that’s true for the pair of confusingly- and similarly-named albums released in the early 70s. Gene Harris / The Three Sounds (1971) and Gene Harris of the Three Sounds (1972) are soul jazz (and just-plain-jazz with (and without) vocals. Very much of their time, these LPs have aged well, despite being hard to locate for many years. Now reissued on Real Gone Music, these sixteen cuts of funky-soul and jazz goodness can be enjoyed by modern audiences.

Gene Harris‘ piano enlivens every one of these tracks, but don’t let the Three Sounds monicker fool you into thinking these cuts are just piano, bass and drums. There’s some (here’s that word again) funky guitar work, plus some tasty percussion to spice things up. Imagine a cross between some of the more soulful jazz pianists of the era (Herbie Hancock, to name one) and the kind of thing that Isaac Hayes did in his more uptempo moments, and you’ll have a flavor for The Three Sounds.

The vocals are fine – Harris is an expressive vocalist, and massive overdubs (as on “I’m Leaving”) create a Harris-chorus of sorts. But it’s on the instrumental numbers (such as “Your Love is too Much”) in which the band really gets into the deep groove. While the piano filigree on “Did You Think” is pretty amazing in its speed and complexity, the somewhat maudlin song doesn’t support it well enough. But the instrumental “Put On Train” again bridges that gap between jazz and Curtis Mayfield circa Super Fly. “You Got to Play the Game” aims for a slick Philly soul vibe, and is reasonably successful if a bit unabashedly commercial-sounding for this set.

The alternating on Gene Harris / The Three Sounds between vocal and instro numbers continues with the fun and groovy “What’s the Answer?” (not strictly an instrumental cut, but close enough). But then the group breaks the pattern and serves up another no-word cut, a thrillingly inspired cover of the Beatles‘ “Eleanor Rigby.” The album wraps up with “Hey Girl,” enlivened by some deft piano work and slick guitar work.

The sonic approach on the 1972 album – a Harris solo outing – is quite a bit different: the funk and soul are dialed way back in favor of a more straight jazz approach. “Django” kicks things off in a much more cocktail-lounge sort of manner. “Lean on Me” adds vibes to the arrangement but doesn’t offer a lot not present in Bill Withers‘ original. As a whole the ’72 LP aims for a more subdued approach, one that’s far less funky and more traditional. “A Day in the Life of a Fool (Manha De Carnaval)” veers perilously close to easy listening.

The oft-covered “John Brown’s Body” gets a tender piano-centric reading, but sadly it wouldn’t be out of place in an upscale hotel lobby bar. “Listen Here” revives the funkiness factor, and is a showcase for Harris’ piano plus some wah-wah guitar work. The brushwork and upright bass on “Emily” support Harris’ gentle and subtle piano work, but again, for fans of the previous disc, this might seem too pretty by half.

Perennial jazz standard “Killer Joe” gets a spirited reading from Harris and his players, and it’s among the disc’s finest pieces. The album wraps up with “C Jam Blues,” in which Harris’ foil is a very George Benson-ish (or Wes Montgomery-ish) guitar from the always-thrilling-yet-tasteful Cornell Dupree.

Pat Thomas‘ liner notes give background and take proper note of these two LPs’ status as favorites among crate diggers around the world.