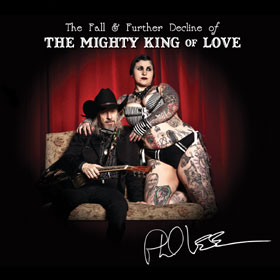 I nearly passed this one by. The cover turned me off, and as I’ve mentioned before, with so many CDs for potential review, an off-putting cover image can sometimes be enough to cause me to just move on. Guy with a hat? Check. Acoustic guitar in hand? Check. Female cover model who I find, well, shall we say, non-arousing? Double-check. But for whatever reason, I decided to give this unwieldy-titled album (The Fall & Further Decline of the Mighty King of Love) a spin.

And it’s pretty damn fine. Phil Lee is a weathered, wizened troubadour, and he sounds like the sort of guy you’d cross at your own peril. But his lyrics are strong and paint evocative pictures. And the musicianship and arrangement is a tasty balance of laid-back and tight-as-a-duck’s ass. The songs all sound as if they were cut with all the effects knobs turned to zero: no bullshit studio trickery for this guy. And that approach suits him well, on songs like the NSFW “Blues in Reverse,” which is sexy, sassy and swaggering all at once.

“All You Need” sounds like a much more countrified Neil Young. “I Like Everything” feels like (but doesn’t sound like) zydeco; it’s not a stretch to imagine the likes of Willie Nelson having a lot of fun with this one. “She Don’t Let Love Get in the Way” shows that Lee is adept at mastering whatever style he sets his sights upon; one can imagine him cutting a very effective rock album were he so inclined. “What Your Baby Wants” is country blues, and “Let your Mind Roll On” is a jugband romp. A credits-roll of “She Don’t Let Love Get in the Way” caps things off nicely, and a bootleg-sounding live “It Can’t Hurt” will leave those who’ve already been won over by Lee’s studio stuff anxious for the opportunity to see and hear his engaging presence live onstage.