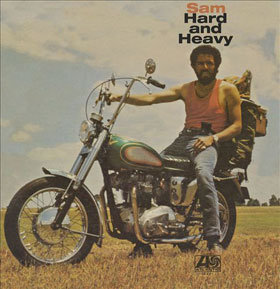 “Wooly Bully!” Yes, if you remember pop music of the 1960s – fondly or otherwise – you will recall this garage rockin’ classic. With its wheezing Farfisa organ lines, manic-and-stomping delivery, the biggest hit for Sam “The Sham” and the Pharaohs was all over the radio (#2 on the charts in June 1965). The novelty quality of the song may have obscured the fact that Domingo Samudio (sometimes listed as Zamudio) and his band actually had a number of other good musical ideas; the 1967 compilation The Best of Sam the Sham & the Pharaohs is actually quite a good record all the way through, and is worth tracking down (I have it on vinyl, but then I would).

But the silly nature of some of the group’s songs (“Lil’ Red Riding Hood,” “The Hair on my Chinny Chin Chin”) caused them to not be taken as seriously as they might have liked. The group’s Tex-Mex stylings were certainly closer to Doug Sahm & the Sir Douglas Quintet than to, say, Bubble Puppy or the 13th Floor Elevators, but they deserved more respect than they often got.

Times changed, as times do, and by 1971 Samudio cut a “solo” album under his own name. Titled Sam, Hard and Heavy (no relation to the similarly-titled Paul Revere and the Raiders LP from a few months earlier, Hard ‘N’ Heavy (With Marshmallow)), Samudio’s album enlisted ace players from the Atlantic Records stable. The Memphis Horns provide support on a number of cuts, and Duane Allman(!) plays guitar and/or dobro on two tracks (one is a bonus outtake, a cover of “Me and Bobby McGee”). Memphis legend Jim Dickinson is on hand with his band The Dixie Flyers, and Tom Dowd produces the session. And – oddity of oddities – Sam, Hard and Heavy actually won a Grammy® award for best liner notes. (I dunno about “best,” but they sure are, well, idiosyncratic.)

As is sometimes the case with this, where an artist is backed by ace players, the support team threatens to overwhelm the ostensible front man. “Homework” features an uptempo arrangement and a horn accompaniment that’s nothing short of thrilling. And the understated guitar solo is pretty ace, too. But Samudio sounds as if he’s struggling to keep up with it all. (To be fair, so might you, but then you’re not cutting an LP for Atlantic, are you?)

That’s the case on many of the other cuts as well. “15° Capricorn Asc.” (a Samudio original) chugs along, and Samudio gamely sings his bit (he’s oddly low in the mix throughout most of the record) but one wonders what the late Otis Redding might have done with this often top-shelf material. Mike Utley‘s organ solo is exciting stuff; Samudio eggs him along, with shouts of, “Work it! C’mon! Push!” The Sweet Inspirations are suitably sweet and inspiring on “Lonley Avenue,” and Samudio comes briefly to the fore for a gospel-flavored “I Know It’s too Late/Starchild.” In fact, as the all-star band lets loose on the track, it feels not unlike a Memphis answer to George Harrison‘s sprawling All Things Must Pass sessions.

Sam, Hard and Heavy is no sort of guilty pleasure like Lord Sutch and Heavy Friends; Samudio can sing, whereas Screaming Lord Sutch most certainly could not. But Sam’s album does share that singer-in-over-his-head vibe just a bit. Still, the songs and musicianship on hand make this a must-hear. Real Gone Music is to be commended – as ever – for rescuing another worthy album from undeserved obscurity.