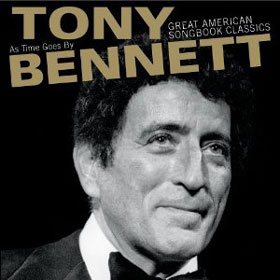 In 2005, Concord Music Group brought together all of the music Tony Bennett cut for his own label and issued a sprawling, four-plus-hour box set called The Complete Improv Recordings. That set included five reissued albums plus an assortment of previously-unreleased material. For serious Bennett fans, it’s clearly an essential purchase. For more casual fans – those who enjoy the man’s superb vocal styling but who don’t feel the need to own an exhaustive package – Concord eventually (2011) issued The Best of the Improv Recordings.

The label seems intent on keeping Bennet’s catalog in front of the buying public, so further reissues have taken place. Owing to the romantic nature of much of Bennett’s work, the 2012 set Isn’t it Romantic was timed for release right around Valentine’s Day. And in 2013, a similar set also came out around that time. As Time Goes By: Great American Songbook Classics focuses (as you might expect) on standards. All but two of the ten selections had also appeared on The Complete Improv Recordings, so clearly this one is meant more for the casual fan. But what’s a bit unnerving – and uncharacteristic for a venerable outfit such as Concord – is that no less than eight of the tracks on As Time Goes By also appeared on the (sixteen-cut) Best of the Improv Recordings. Two of the songs were on Isn’t It Romantic as well. Despite the unquestionable quality of the music herein, the current reissue/repackage program is clearly wearing the trail thin.

Clearly, the music’s great, the recordings are great, and there’s a nice mix between small ensemble work (much of it featuring Bill Evans on piano) and more swinging, upbeat big-band arrangements, but in the end As Time Goes By feels unnecessary: hardcore fans have the box set, and casual fans of Bennett’s 1970s output have a plethora of other choices. Will Friedwald‘s liner note essay is insightful, but then so were his notes in Best of the Improv Recordings (themselves excerpted from the complete box set!). So in the end, As Time Goes By deserves filing under Dept. Of Redundancy Dept.