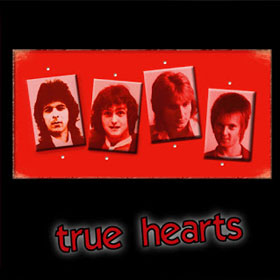 In addition to their esteemed role as one of the go-to labels for new powerpop (and, I understand, alt.country), Kool Kat Musik has taken on an additional role: powerpop archivist. With their latest unearthing of the 1980 self-titled release from True Hearts, the label continues its fine work.

The songs on True Hearts absolutely scream 1980, but there’s not a thing wrong with that. New wave was bubbling under, and the influence of The Producers, The Knack and other bands of that caliber were exerting their influence on countless local/regional bands, in a manner similar to (but on a much smaller scale than) the garage scene of the mid 1960s. Houston-based True Hearts were one of myriad tuneful rock bands plying their trade in those days, but their songwriting and arrangement styles took many of the right cues from some of the best that pop music had to offer at the time.

True Hearts were a four-piece, and their studio arrangements seemed – either by design or necessity (or perhaps both) to stick to a sound that could be recreated live onstage at the local bar. You won’t hear a surfeit of overdubs and/or production flourishes; while the production (ostensibly by the band; an engineer is credited, but not a producer per se) is clean and straightforward, it’s sharp and not at all demo-ey.

Most of the songs are built around the basic guitar-bass-drums arrangement, but occasionally the band takes a side trip down retro paths, as on “If I’m Late,” with its shades of ’67 Beatlesisms. The mercifully brief “A Girl in a Men’s Magazine” is borderline fey; it might have seemed adventurous in 1980, but it hasn’t worn well. But when the band sticks to is strong suit – four-on-the-floor, riffy rock, they fare much better. After awhile, songs like “Trust Me Candy” and “God’s Gift to Girls” begin to tumble into one another – True Hearts’ rocking songs aren’t a varied lot – but they’re fun while they’re playing, and might make the listener wish for a t-top Camaro in which to play the disc.

The brief liner notes don’t make clear which of the four takes most of the lead vocals (they all sing on the album), but what is clear is that he sounds uncannily similar to Graeme “Shirley” Strachan, lead singer for Australia’s Skyhooks (without the Aussie accent, of course). And while drummer Rick Holeman‘s incessant roto-tom fills start out as merely an amusingly dated characteristic, they soon become (though injudicious overuse) an annoying tic: did he have some sort of endorsement deal that required him to use the rotos on every song? But those are minor quibbles, and every era has its musical clichés (wah-wah pedals, the Patented Phil Collins Gated Reverb Drum Sound™, etc.) so they get a qualified pass here. Less forgivable are the tight-yet-somehow-flat backing harmony vocals on “Talkin’ Bout Girls.”

Bonus points to True Hearts for not taking the easy way out and tossing a ringer of a cover onto their album; nearly all of the songs are composed solely by the group’s multi-instrumentalist (and probable lead singer, now that I think about it) Terry Carolan. Perhaps the strongest cut on the album is also its speediest: “Sleep Tight” would have been the best contender for inclusion on a powerpop compilation of the era (as it happened, a song the liner notes describe as “the anthemic ‘Everyime’” did earn that honor, but it’s not included here). The liners also tell us that True Hearts’ total recorded legacy is seventeen songs; the eleven on this set represent the output of the original lineup.

Not deathless music, and somewhere short of essential, True Hearts remains worth hearing for fans of the 1980 brand of powerpop, and for anyone who wished Skyhooks made an album in which they dialed back their bent humor. And of course perversely misguided fans of those f&#@ing roto-toms will treasure this one forever.