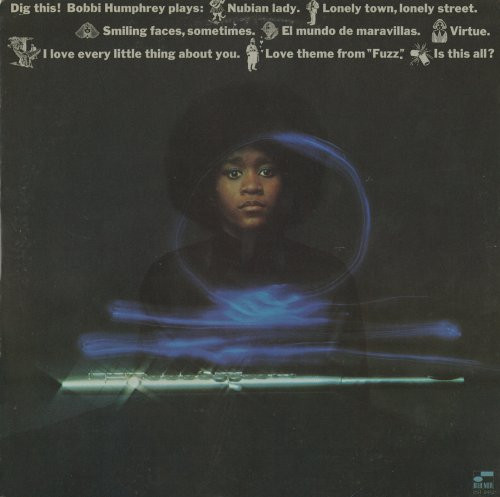 Some jazz purists might look down their noses and sniff at the style known as soul jazz. And wile I don’t share their point of view, I understand where they’re coming from. Often as not, soul jazz is (or was, during its late 60s -to-early 70s heyday) a case of ace jazz cats making music acceptable enough for the masses who find regular jazz too inaccessible, too out-there. And with its folding in influences of rock, rhythm & blues and even disco, soul jazz can seem – in the eyes and ears of its detractors, at least – as the worst of all possible worlds, a sellout.

But I tend to look past that, and in return find some really fun music that evokes a time and place in pop culture. The best soul jazz – really just jazz with more conventional melodic forms – can move the listener in a way that the more cerebral stuff might not.

At the tender age of 21, flautist Bobbi Humphrey had already secured a contract with the highly esteemed Blue Note label, and cut Dig This! as her followup to her debut of the previous year, Flute In. While Humphrey’s lyrical flute work is always out front, able backing provides her songs with the texture they need. Humphrey’s strength lay not in compositional skills: all eight pieces on Dig This! are covers or written by others. But this music is – thanks in large part to the deft, expansive arrangements – the kind of thing that movies get made around. “Smiling Faces Sometimes” focuses more on the underlying riff than the signature melody, and some way-funky clavinet and electric guitar make this nearly the equal of the original. When Humphrey spars with guitarist David Spinozza near the song’s end, it’s a thrill; Wade Marcus‘ sympathetic string arrangement only heightens the vibe.

“Virtue” is an abstract piece, closer in some ways to Miles Davis‘ Bitches Brew than any sort of soul jazz. Davis sideman Ron Carter is the bassist throughout Dig This!, by the way. “I Love Every Little Thing About you” sounds like the theme to a film of TV show of the era, with its bright and catchy melody, shuffling proto-disco drums and more of those funky bass and clavinet breaks.

Taken as a whole, the music on Dig This! can reward close listening, revealing some exciting playing and arrangement. Or it can serve as pleasant, uptempo background music of the sort that doesn’t insist upon total attention. It’s the rare album that succeeds on both levels. Long unavailable in any form, Dig This! got a well-deserved re-release – its first ever in digital format – by Real Gone Music in very late 2012.