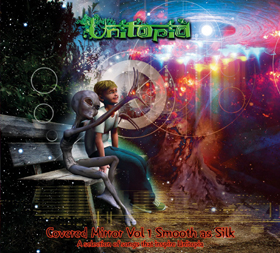 Like any musical genre or subgenre, progressive rock has many varieties within its confines. There’s aggressive, sometimes atonal math-based stuff; there’s brutal prog-metal, there’s retro-prog that tries to recreate the sound and/or vibe of the classic stuff from the 70s. And there’s a melodic, accessible flavor, the kind that makes the charts, albeit rarely.

It’s these last two that are the territory staked out by an Australian outfit called Unitopia. Formed in the new century’s first decade, they’ve released three studio albums of original material, plus a live album. But their most recent project is a tribute to their influences. Covered Mirror Vol. 1: Smooth as Silk is subtitled “A selection of songs that inspire Unitopia,” and for the most part the songs will be familiar to lovers of rock’s more progressive side during the 1970s.

Some of the pieces are near note-for-note recreations: the group’s rendition of Klaatu‘s “Calling Occupants (of Interplanetary Craft)” follows the original closely, but does substitute some instrumentation flourishes that up the excitement factor. Marillion‘s “Easter” is one of the album’s lesser-known tracks (possibly since the original dates from 1990, long after prog had ceased to be much of a commercial force in the USA). Mark Trueack‘s vocals strongly recall Peter Gabriel throughout the album, and rarely more so than on this track.

Few would consider Icehouse a progressive rock group – Americans know them if at all as a group that enjoyed a bit of early MTV rotation – and the inclusion of that group’s “Man of Colours” makes the point that Unitopia is unashamed to admit influences from the more mainstream end of the rock spectrum. But then there’s a lengthy Genesis medley. Here the band stretches out to survey more than the usual-suspect tracks from the venerable British group. Yes, the prog classics appear in the medley: “Supper’s Ready,” “Dancing with the Moonlit Knight,” The Lamb Lies Down on Broadway” and a particularity effective reading of “Carpet Crawlers” – but it’s the inclusion of a tune from Genesis’ debut (“The Silent Sun”) that’s the real surprise. In Unitopia’s hands, it feels more like a Phil Collins-era Genesis track, only better.

Things get a bit strange from this point onward. Led Zeppelin‘s “Rain Song” is recast in a more AOR sort of arrangement; it works, but pales with the original. A bit of electric sitar does help, though. Supertramp‘s “Even in the Quietest Moments” is effective enough, but the energy seems to be lacking halfway through the album.

A drastic rearrangement of Todd Rundgren‘s classic “Can We Still Be Friends” is the album’s nadir. It feels overly dramatic and turgid all at once. It’s a serious misstep. After an instrumental interlude, things move in a more classic-prog direction (a positive step) with a cover of The Korgis‘ “Everybody’s Gotta Learn Sometime.” This gentle tune proves that Unitopia can deliver quiet subtlety; it’s just that the tracks preceding this didn’t quite hit the mark.

A Yes medley is suitably over the top, with selections from throughout the group’s lengthy and varied catalog. Some sections work quite well – “And You and I” especially — but the rethink of “Owner of a Lonely Heart” strips the song of its excitement, leaving exposed a vaguely cheesy ballad exposed.

Alan Parsons Project‘s “To One in Paradise” is faithful to the original, with all the drama one expects of a track from Tales of Mystery and Imagination / Edgar Allan Poe.

The record wraps up with a brief Flower Kings tune, “The Way the Waters Are Moving.” Like many (possibly a bit too many) of the songs on Covered Mirror Vol 1, it’s a ballad. Overall, the album is polished to a brilliant shine, but a bit more rocking sections might have enlivened things a bit. Perhaps that’s the plan for a followup; we’ll see.