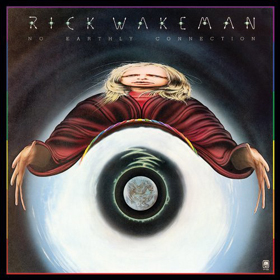 I had my initial doubts about this one, and with good reason. Among music fans, Rick Wakeman is a polarizing figure. One either loves his work or despises it. For those in the former camp, his keyboard playing, composing and arranging show a deft, assured and endlessly creative master. Both as a highly in-demand sessioner (that ‘s him on David Bowie‘s “Changes,” Cat Stevens‘ “Morning Has Broken” and Black Sabbath‘s “Sabbra Cadabra,” to name but three of countless contributions he’s made) and as an on-again-off-again member of Yes (five times so far), his work is often exciting. But to his detractors, he’s the visible symbol of everything that was wrong and excessive with rock in the 1970s.

His breakout solo album, 1973’s The Six Wives of King Henry VIII established him as a potent force, and his followup albums were also quite good, though they didn’t quite scale the heights of The Six Wives. By 1976, Wakeman had settled into recording with a steady band he called the English Rock Ensemble. Still interested in conceptual/thematic works, No Earthly Connection concerns itself with big ideas. The music remains keyboard-heavy – what else would you expect? – but the Ensemble is prominently featured as well. Despite his high-falutin’ musical goals, Wakeman has always been a somewhat grounded Everyman type: remember that he stood out like a sore thumb among Yes’ ascetic vegetarian types; it’s easy to picture him with a pint of lager and a turkey leg (these day’s he’s a calmed-down teetotaler). Oh, and a billowing cape. Always a cape.

“Music Reincarnate Part I: The Warning” has plenty of string sounds and fragile, effecte section, but it features lots of funky Clavinet and some very Chris Squire-ish bass playing (courtesy of Roger Newell). The music sounds very much like a cross between Alan Parsons Project and Gentle Giant: the former is recalled through the album’s ambitious-yet-catchy arrangement flourishes, while the latter comes to mind via the tricky time signature changes and complex vocal arrangements (Ashley Holt is in fine form throughout). “Part II” rocks harder and highlights Tony Fernandez‘ drum work, while Wakeman shows us what it might sound like if Stevie Wonder went prog.

By “Part IV” things get a little showbizzy and move away from rock-centric styles, what with some trumpet figures and choral-sounding vocal bits; by this point No Earthly Connection starts to feel a bit more like soundtrack music (Wakeman’s most recent album had been the soundtrack for Lisztomania). But the dynamics keep things interesting. “Part V” gets pretty far into the weeds, featuring vocal snippets that float in and out of the mix while Wakeman provides an atmospheric musical bed. Here, soe of the chanted vocals may cause the listener to think of Spinal Tap‘s spoken intro to “Stonehenge.” A bit pompous and silly to be sure, but fun nonetheless. And the analog synth solos are predictably tasty. Once the five-part “Music Incarnate” suite ends, the remaining two tracks (also lengthy) continue the vibe (and, one supposes, story line of sorts). But it’s the keyboard work – busy, glistening harpsichord lines all over “The Prisoner,” for example – that keeps thing moving.

If you like pianos, organs, Mellotrons, Moogs and all sort of other keyboard instruments, you’ll find plenty to like on No Earthly Connection, but it’s overall a more mainstream (instrument-wise) record than Wakeman’s earlier works. Gene Sculatti‘s liner notes gamely attempt to place the album in historical context, but his overall tone seems to be (I’m paraphrasing here) “Rick Wakeman did a lot of great stuff. Also, there’s this album.” Still, fans of Wakeman’s work will want to hear No Earthly Connection, and Real Gone Music is once again to be commended for rescuing an obscurity from the cutout bin of history (No Earthly Connection has never been released digitally in the Western Hemisphere until now).