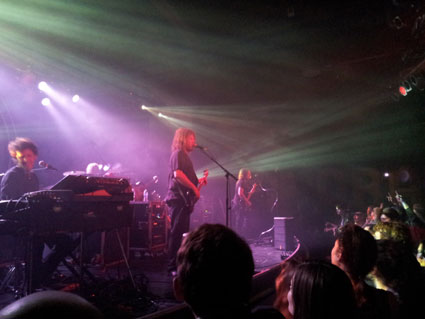 My firsthand experience with tribute bands is quite limited; in general, the concept doesn’t do a lot for me. While there are quite a few acts touring (quite successfully, I should note) the works of more famous bands, many of them base their stage act on the visual style and cues of the band being tributed. In Asheville alone, we have a number of tribute bands who regularly make an annual (or more-often) swing through for a show. There’s a Michael Jackson one (Who’s Bad), a Misfits one, and for quite some time we had our own locally-grown Led Zeppelin tribute band, Custard Pie. For me, though, many of the tribute bands – and I’m speaking in general here, not of the aforementioned acts – seem to cross over into play-acting. Of course some of that is necessary if you’re paying onstage tribute to Jim Morrison of The Doors, or KISS, or any other acts possessed of a distinctive visual aesthetic.

And that is one – but only one, mind you – reason why I absolutely love The Machine. They perform the works of Pink Floyd, my second-favorite band of all time (second only to The Beatles). And one of the distinctive features about the Floyd was that they didn’t have much in the way of distinctive visual features. Yes, they had Mr. Screen, the large, round projection tapestry, and loads of lights and whatnot, but often as not, the band members themselves weren’t an integral part of the visuals. It was about the music.

As it is with The Machine. I first saw them four or five years ago, during which time I got a chance to go backstage and talk with the band pre-show. I had missed them on subsequent Asheville dates, but jumped at the chance to catch their January 2013 show.

As it happened, the band had very recently undergone a significant lineup shift. Guitarist Joe Pascarell had left the band, as had drummer Todd Cohen. So for 2013, bassist Ryan Ball moved seamlessly into the guitar role, joined by newcomers Adam Minkoff on bass and lead vocals, plus drummer Tahrah Cohen (who, I’m told, was a founding member of The Machine decades ago). [Note: See a reader’s correction in the comments below. — bk] Only keyboardist Scott Chasolen remains intact from the previous lineup.

What’s amazing is – though the Orange Peel date was the first public performance featuring the revised lineup – if anything, The Machine put on a better show this time around. (And I found their last show an unqualified success.)

Much of this is due, I think, to bassist Minkoff. His vocal range and texture are such that he can convincingly cover both Roger Waters‘ vocal parts (not that hard; Rog’s a great songwriter but no award-winning singer) as well as those of David Gilmour. So with the expert vocal harmonies of all three other band members (including drummer Cohen), The Machine are well-equipped in the vocal department.

Cohen does a fine job on drums, recreating Nick Mason‘s distinctive style; Mason has never been on the short list of technically great drummers, and his bag of tricks is relatively small, but his particular style is such an integral part of the Pink Floyd sound that criticisms of his chops are moot. Cohen did a thrilling job on her roto-tom intro to “Time,” adhering to the spirit of Mason’s work without aping it.

Ball plays Gilmour’s guitar leads as if he’s been doing it for years, despite just having moved over from bass guitar. While his Stratocaster had a tad less reverb applied to it than is Gilmour’s custom, that may have been a function of the room’s acoustics more than anything else. Like Cohen, he struck a perfect balance between playing Like The Record and giving the songs his own personal spin.

Chasolen is as central to The Machine’s sound as Rick Wright was; if one isn’t paying close attention, it’s easy to overlook just how integral what he does is to the overall presentation. That he’s seated (same as Wright always was) makes his presence that much more subtle. But he’s key.

The Machine know their audiences, and (as discussed with me a few years ago) they strive to give audiences what they want; this means playing a certain number of the really well known numbers, but also throwing in a few lesser-known tunes for the hardcore Floydians (like me). On this night, The Machine gave us four songs from The Dark Side of the Moon, four from Wish You Were Here, five from The Wall, one from A Momentary Lapse of Reason and two from The Division Bell.

But they also dug deeper and performed “Sheep” from Animals (an album Pink Floyd didn’t touch live post 1977), two from Meddle (a shortened-to-fifteen minutes “Echoes” and the virtually unknown “Fearless”), as well as A Saucerful of Secrets‘ “Set the Controls for the Heart of the Sun” (the night’s only pre-1970 tune; no Syd Barrett-era material at all). But for me the biggest pleasure of many delights was The Machine’s reading of “Childhood’s End” from Obscured by Clouds, an underrated tune from an underrated album.

The band kept mostly to the original album arrangements (though as I’ve read elsewhere, if you want to hear how the Floyd sounded live, go see The Machine), yet they did stretch out for a longish and tasty keyboard solo at the tail-end of “Another Brick in the Wall, Part Two.”

Seeing as Rick Wright has passed on, and (though Gilmour and Waters have largely buried the hatchet) Pink Floyd will never again play live, The Machine is a worthy and entertaining flame-keeper. And twenty-five years on, they seem only to be improving at their chosen game.