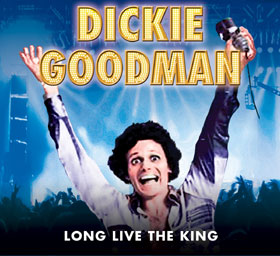 File this one under Guilty Pleasures. Back in the early 70s when I was a kid, the novelty records that Dickie Goodman put together were a cultural touchstone. A trash-culture one, perhaps, but significant nonetheless, especially in the life of a ten-year old pop culture omnivore such as young Billy.

Goodman was certainly ahead of his time on many levels: his ideas about reprocessing the work of others aren’t really, when you get right down to it, all that far removed from the art of Andy Warhol, or the work of any number of rap/hip-hop acts. Of course Goodman was never aiming for High Art; far from it. These admittedly goofy pieces combine silly “interview” questions with snippets of then-popular songs. And the popularity of Goodman’s little vignettes was pretty long-lasting: his first hit was “The Flying Saucer,” way back in 1956, and like any effective trash culture act, he milked that one as long and as far as he could. But the hits continued well into the 1970s, with “Mr. Jaws” in ’74.

Sadly, my personal favorite, “Energy Crisis ’74” isn’t among the 27 cuts included on Long Live the King. Its format deviated little from what came before (the hits) and after (the somewhat tired, flogging-a-dead-horse non-hits, which fill the second half of this disc), but it was fun, and appealing enough that this then-ten-year-old spent nearly a dollar of his hard-earned allowance on the 45rpm single. (I still have it.)

Goodman’s son Jon pens an informative (if perhaps a bit more reverent than one might like) set of liner notes for this highly unusual Rock Beat release. His “Election 2012” – included here – attempts to revive Dad’s old format, and while all of the elements seem to be in place, it’s just not quite the same. Of course I’m not ten anymore, either. Still, Long Live the King will bring smiles (at least briefly) to the lips of those of a certain age who subsisted on AM radio in their formative years.