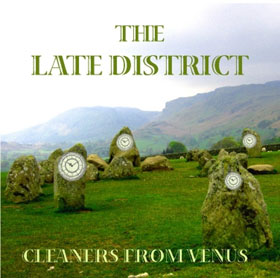 On The Late District, Cleaners From Venus (the nom de pop of Martin Newell) depart ever-so-subtly from their winsome brand of pastoral, homespun pop. Newell dials back (but certainly doesn’t wholly eliminate) his powerpop tendencies, instead focusing more on his ability to craft slice-of-life vignettes that evoke his native Anglia. As he describes it, The Late District is “a collection of pictures and musical sketches which document a summer in England.”

In practical terms, this means that there are longer instrumental passages; Newell uses instruments and found bits of audio (dialogue, sound effects etc.) to paint his musical pictures. Meowing cats and some seashore sounds that create a sort of workingman’s version of Quadrophenia‘s vibe serves as critical components of many of the songs here. Newell’s musical tools are as likely to be drawing-room piano as his trusty guitar. Though he’s one of the most quintessentially English artists in all of pop music, Newell doesn’t limit his styles to those associated with the British Isles; a wordless vocal track evokes strong memories of The Beach Boys‘ similar masterpiece, “Our Prayer.” Elsewhere, instrumentation one expects to hear from any number of vintage-clothed Americana combos – mandolins, fiddles and such – are employed in jaunty campfire-style numbers.

Unlike many other Cleaners projects, The Late District was conceived and created as a unified work. Calling it a concept album might be using unnecessarily strong language, but there’s definitely a unity of purpose across the fourteen tracks. And Newell’s famously droll wit is never far, even when the songs themselves are touching vignettes of British life: his notes on the songs come complete with fictional back stories and titles for the nonexistent films to which each tune refers.

So while decidedly not a powerpop work such as his last record (late 2011’s In Chimp World), The Late District is arguably something altogether richer, altogether more textured, deep and – ultimately – rewarding. One hesitates to use the epithet “mature” when discussing the work of a nominally rock/pop artist; too often that means a loss of vigor and of drive. Neither is true of Martin Newell, a man who – countless albums into his career – continues to create some of his strongest material. With its occasional forays into jazzy styles, The Late District is indeed a departure from what some might see as the Cleaners’ métier; in truth it’s merely the latest development in the ongoing musical saga of one of music’s most unjustly underappreciated figures.

UPDATE: I almost forgot…available from the fine folks at Kool Kat Musik.