Bill Kopp: I interviewed John Murphy of Shoes recently about their new Ignition album. When we got to talking about the band’s future plans, he suggested they might go a route similar to what you’re doing. Rather than making fans wait two years or something for a new collection of songs, they might put out a few songs every few months. We agreed that one big advantage of this is that it creates a more constant means of communication between artist and fan. Rather than the artist disappearing (so to speak) for a long time, putting out EPs keeps the artist in the minds of the fans, and provides him or her with feedback. Is that kind of thinking consistent with your reasons for the EP series?

Marshall Crenshaw: yeah, that’s exactly the same idea. While we were trying to make this happen, I was really worried that somebody was going to read something I said about my idea, and then it was going to look like I was late to the party. So I’m just glad that I was able to get this going now. Of course I’m not saying that anybody got the idea from me, but it is a great idea. It seems like an obvious thing for somebody to pick up on. 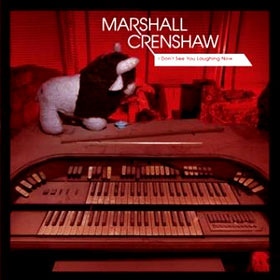 BK: That two-way communication quality wasn’t a part of the old record label marketing mix ten, twelve years ago. These days, if you “pull a Fleetwood Mac” and take three and half or four years to put out an album, people will forget who you are. Artistry aside, putting out a couple songs every few months seems like a better way to build and maintain a fan base.

MC: Actually I got my initial idea when I heard that Sam Phillips was going to attempt a subscription thing. And then I knew about the Todd Rundgren from years ago too. So I combined the Sam Phillips idea with vinyl; that was all a matter of personal taste.

BK: The cover of “No Time” from the last Move record Message From the Country record is a little bit of a departure for you. In terms of material, do you think that EPs offer you any sort of artistic leeway you might not otherwise have with albums? In other words, do you feel like you can try things musically on an EP that you couldn’t do on an album? Or is it the other way around: do you feel like one of the three songs needs to have a “single” feel to it?

MC: I think I entered a different kind of headspace with this project. I have done cover tunes on albums before. But I guess if I were making an album right now, I would consider letting loose and doing these cover tunes that I’ll be doing. It just seems like a fun idea. “No Time” was a song that I really loved when it was brand new. It’s kind of a jaw-dropper. Even on that Move album, it takes you completely by surprise.

BK: That particular track would have fit equally well on the first Electric Light Orchestra album, which they cut right around the same time.

MC: It’s a really nice piece; I love it.

BK: I’ve seen you in concert three times if I count Beatlemania in 1978. The second time you opened for Hall and Oates at the Omni in Atlanta, and I must say that I was nearly the only person there who knew who the hell you were.

MC: Yeah, that could very well be.

BK: Yes, I thought so. I didn’t think all that much of Hall and Oates…

MC: We toured with them for a long time. Y’know, I hated all that. A lot. I never liked arena shows myself. It was a good opportunity, but I didn’t make anything out of it. I had no sense of pragmatism about thing like that back then. I just wanted to get out of there; every night we would just pound our way through our set, and split. I guess it might have been the right thing to do to maybe try a little bit. But I didn’t.

MC: No. I didn’t really try at any point to connect with any of those audiences, no. I didn’t want to be there. I liked our circuit; we had a really great circuit that we played on ourselves: small theaters, places like First Avenue in Minneapolis. I love those kind of venues. I was really happy at that level, but the idea was that you were supposed to build up from there. And I never aspired to play arena shows.

BK: The third time I saw you perform was here in Asheville in 2007 for a solo acoustic set. But I think I’m more excited about the upcoming show you’ll be doing soon in Greenville SC – at the sort of venue you enjoy – with the Bottle Rockets backing you.

MC: I’ve played with them a lot now, almost two years now. By the time we get to that show [January 25, 2013], it’ll be over two years. We really like playing together, and it’s a really great rock show. From a song standpoint, it’s pretty hard to beat, I think. They love doing what they do, and they’re great at it. It’s been a really good thing for us, and we always look forward to getting back together. I’m going to go out with Dave Alvin, too; that run is going to go from San Diego to Vancouver. I love these collaborations.

BK: On the new I Don’t See You Laughing Now EP, “There She Goes Again” with the Bottle Rockets mines a heretofore unheard the bluesy feel. Is that kind of reinvention of the songs something we can expect more of for the January 23 show?

MC: I’ve been playing it that way for awhile now, for about five or six years. It just struck me at some point that it would feel right that way. I just got the idea to cut the time in half, and it just seems to fit the emotional message of the song. It’s more true to what the song is saying.

That’s one of the built-in things with this EP project; each one of the records is going to contain one of my earlier tunes, each in a sort of re-imagined version.

BK: So have you sort of storyboarded out what’s going to be on all six of the EPs in the series?

MC: The second one is done, and the third one, I know what it’s going to be. And now I have months to sort of hang back and figure out the rest. I don’t want to plan all six of ’em now; planning or recording them all in advance would really be contrary to the whole idea of the project.