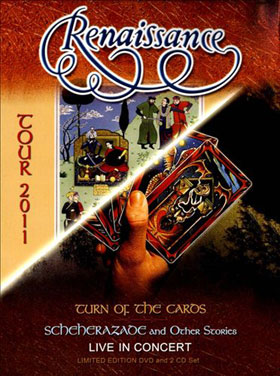 “Carpe diem,” quoth the poet Horace. Even in a dead language, wiser words have rarely been written. And while F. Scott Fitzgerald limited his observation to Americans when he claimed “there are no second acts…” occasionally, there are.

Renaissance was never an easy act to pigeonhole. At first blush, some might peg them as part of the British progressive rock movement of the late 60s and early 70s. But that label never fit them well; Renaissance rarely rocked in a traditional sense, and their melodies largely (but not completely) eschewed the tricky meter and jarring dynamics endemic to prog.

Despite their name, the group didn’t fit neatly into the ren-fest retro bag, either; though their subject matter tended toward romantic, epic and medieval themes, they didn’t go too heavily for things like lutes and psalteries. With a sound built around three key elements – Annie Haslam, dizzyingly controlled and expressive voice, Michael Dunford‘s precise and lyrical acoustic guitar work (much of it on 12-string) and lots and lots of keyboards – Renaissance fit into the more ambitious end of the musical scene in the 70s, but somehow always stood apart.

Notwithstanding that the group was actually – believe it or not – originally a spinoff of The Yardbirds (Keith Relf and Jim McCarty founded the outfit as a folk-rock ensemble), by the time Renaissance found their signature style, all of the founding members had departed, and the group was essentially and practically a different outfit with the same name. Where Renaissance truly hit their stride – and created their most enduring work – was in the middle of the seventies, with a pair of well-received albums, Turn of the Cards (1974) and Scheherazade and Other Stories (1975). While they created worthy material before and after, those two albums (and a 1976 live double LP that followed them) represent the group’s commercial and critical high-water mark. Dunford’s compositional prowess (with non-performing writing partner Betty Thatcher) was at its peak, and both studio albums were highly successful marriages of thoughtful (and timeless-yet-topical) lyricism and progressive-minded art rock (well, sorta-rock). So while Renaissance managed nearly an album release per year during the 70s, these two were the ones you’d be most likely to find in someone’s collection.

Which makes it less than surprising that a modern-day configuration of Renaissance would return to this music. Both albums were conceived as complete works (an affectation of the era’s musical ambition), and in a time when it’s all the rage for groups to re-create their finest studio moments onstage, they may well have decided that mounting a tour to perform the two albums in their entirety was an idea whose time had come (again).

As far back as the 90s, Dunford and Haslam attempted to jump-start the band (which had effectively folded circa 1983 after having pretty well gone off the rails). But it was only a good solid decade into the 21st century that the duo really hit their second-act stride. Enlisting four younger players (a drummer, a bassist and a pair of keyboard players), Renaissance was back. New music was no longer a priority, but faithfully recreating the best of their old material was a worthy enough goal. So it was that Renaissance recorded and filmed an entire evening’s performance in September 2011 and released it as a 2CD+DVD set titled Tour 2011 Live in Concert.

Some of what you get on this set is predictable (meant here in the best possible way). The sound mix is flawless. The band backing is expert and faithful to the original versions, though not slavishly so. The playing “breathes.” But what’s really remarkable is that Haslam’s voice is still a stunning instrument of soaring beauty. While she’s a bit younger than the main crop of British rock royalty, at the time of this recording she was already 64 years of age. But clearly she’s spent her time keeping her voice — reportedly possessing a three-octave range – in top shape. True, with Renaissance, Haslam need not scream to be heard over the subtle (yet assertive) music, but her soaring flights of vocal fancy are a highlight of the music on this set.

And Dunford’s skills have only improved, as well. His subtlety on his 12-string adds a warm, deep texture to the music. With the pair of keyboardists providing all manner of sounds (though mostly piano, organ and sampled acoustic instruments like flute; there’s nearly no “synthesizer”-type sounds in the 21st century Renaissance), Tour 2011 Live in Concert distills what is best about this band into a lovely package.

Each of the original album performances gets its own CD on the package; the performances are extended a bit here and there compared to the three-decades-plus old originals, but no new music is on offer. The DVD presents the entire concert in high quality on a single disc. A colorful and sturdy package holds the whole thing and includes a lovely booklet containing numerous photos from the evening’s performance.

With Tour 2011 Live in Concert, Renaissance would have seemed poised to make the very best of their own “second act.” But a mere three weeks prior to the publishing of this review, Dunford passed away suddenly, having suffered a cerebral hemorrhage. He was 68. At press time there was (quite understandably) no definitive word on the band’s future. But as the final word from a lineup that features the two key members of Renaissance, Tour 2011 Live in Concert remains a fitting document. Fans can be grateful that Halslam and Dunford took Horace’s advice, seized the day, and created this set.